Following Her Calling in Alexandria
Votes

Following Her Calling in Alexandria 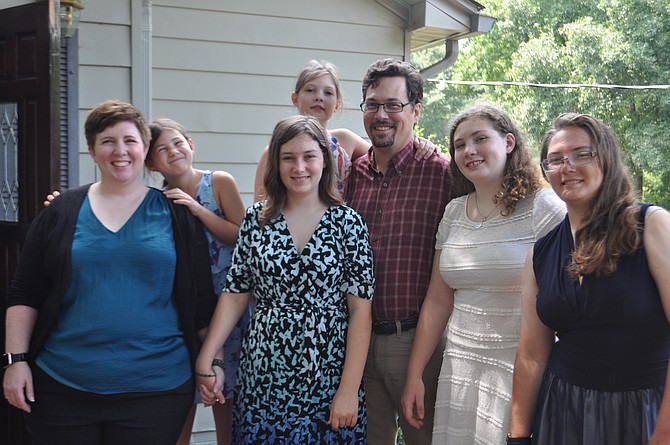 What were your biggest preoccupations when you were in high school? Perhaps you dwelled on your grades. Or, maybe you spent a considerable amount of time with your friends, dissecting every move of an attractive boy or girl in your English class.

Christina Hart-Perkins, the current, and also first female, pastor of Alexandria’s Washington Farm United Methodist Church, wasn’t exactly a typical teenager. Long before she graduated from high school, she discovered her calling to the ministry.

“The summer after my freshman year, my church sent a group of youth to Fairbanks, Alaska on a mission trip,” Hart-Perkins said. “Our main project was to build a basement apartment in a local church for a visiting pastor. It was July, a month when, in Alaska, the sun doesn’t set, so, I didn’t get very much sleep. One night after everyone else was asleep, I started writing about what I was going to do after high school. I had assumed that I would go into medicine from the time I was very, very young … I was writing about this and I heard this voice very clearly say, ‘You will go into the ministry.’”

While she was originally caught off guard by this, she was making sense of it all by the end of this trip to Alaska.

“We were sleeping in this RV, and at first, I thought some of the other kids were messing with me,” Hart-Perkins said. “I said, ‘cut it out,’ and just went back to writing. Then I heard it again, loud and clear: ‘Christina, be at peace; you are going into the ministry.’ The next day, I was assigned to work with a volunteer plumber from Anchorage. I so clearly remember him putting glue on a tool, saying, ‘You’re going to make a really good pastor one day.’”

Her pastor back home agreed.

“When we returned from Alaska, I told my pastor about these revelations,” Hart-Perkins said. “He said, ‘I knew you had a calling and I was just waiting for you to hear it,’” Hart-Perkins said. “From that point on, he mentored me and helped me understand my calling. So, from the age of 14, that was it.”

“It is going really well,” Hart-Perkins said. “It’s been a very good start. I’ve done a lot of small group meetings with a lot of the congregation, which, in total, worships with around 80 people. We are pretty small, but, considering our size, we do a lot.”

As the pastor of Washington Farm United Methodist Church, she does more than lead worship services and deliver provoking sermons.

“I see my role as helping to facilitate the faith community,” Hart-Perkins said. “So, all parts of the church work together to form a community. I’m constantly evaluating whether or not the community is cohesive, if lives are being changed, and if we are achieving what God calls us to achieve. I am a big picture person, so I like to stand on the balcony and observe how all the pieces fit together so that we can be a welcoming, loving, committed community of faith that is making disciples of Jesus Christ and transforming the world.”

Before taking on this role, Hart-Perkins served churches in Iowa and also in different parts of Virginia. From this experience, she knows that her new church home is remarkable.

“No two churches or congregations are alike,” she said. “Lifestyles, needs, and expectations are different, so it’s been really interesting. The last church I came from was the same size but a rural congregation. There are a lot of positives to being in a rural community, but, people in a rural community tend to be there for their whole lives. Sometimes, that means they don’t fully understand the concept of embracing new people.”

As more of a transient congregation, composed of a large number of military families, the people of Washington Farm are far more accustomed to welcoming new people.

“A large percentage of the congregation has some sort of military background, so there is a really interesting sort of dynamic,” she said. “They are a small church who are committed in a big way to mission and service, both formally and informally. Three weeks before I came, I broke my foot. The day we moved into our new house in Alexandria, 14 people were in our house, unpacking the kitchen, setting up beds, doing whatever needed done. And the next day. Then they drove me around for weeks.”

In turn, Hart-Perkins is hoping to develop more internal resources for her new church family.

“There is this pervasive idea of service and community, so my biggest focus is being present with them,” she said. “They are also a congregation that has long history of an outward focus, consistently serving the outward community. My focus is to continue and strengthen what they are good at: building up some of the ministries that have kind of fallen down in the past just because of the ebbs and flows that can happen in a small congregation. We’re rebuilding internal nurturing ministries like those for young adults, for spouses who have lost loved ones, and others.”

In an era of megachurches in brand new buildings on sprawling campuses, Washington Farm United Methodist Church is steeped in Virginia history. Known as “the little green church on the corner,” it sits on land that used to belong to President George Washington.

It became a site of worship for the Nazarene Christian Church in the late 1800s. Then, “the current sanctuary was built in 1905, and throughout the following years, other churches occupied the building and there were also changes of name,” said Sy Berdux, longtime member of Washington Farm UMC. “The chapel has served a place of Nazarene worship, Wesleyan worship, and was a Fairfax County school in the 1930s. Now the Methodists call it home.”

It was in the 1960s that this Methodist congregation purchased the church building and took on the name of Washington Farm United Methodist Church.

“We started with 17 families, and we were a mission congregation until 1971, when Washington Farm began to increasingly commit to new forms of mission and ministry,” Berdux said. “We have continued to serve our community though involvement in a number of local programs. We also take on more and more national and worldwide mission projects.”

The Bishop of the Virginia United Methodist Conference places every church leader. Hart-Perkins and her family are happy with the assignment.

“This is the fourth school district for my oldest children,” she said. “My husband and I have five girls who range from 8 to 16 years old. Even after the first day of school, they came home excited by what they saw, learned, and experienced. My husband and I believe this will be a very good place for them to grow up. We’ll be here for as long as Washington Farm needs my gifts, which I hope is for a long time.”

Finding the right church isn’t always so simple, but, Hart-Perkins is confident there is a spiritual home for everyone.

“Visit a church at least three times before making up your mind,” Hart-Perkins said. “But, before you go, look at the website, find the Facebook page, and see if you know anyone there. Find out what the people at that church are about. Do your research. Talk to the pastor. I know I am more than happy to talk to anyone who wants to know more about the church before coming. Church today is not about fulfilling an obligation. It is about growing in relationship with God and one another.”