‘A Lively and Engaging Show’ in Chantilly
Votes

‘A Lively and Engaging Show’ in Chantilly 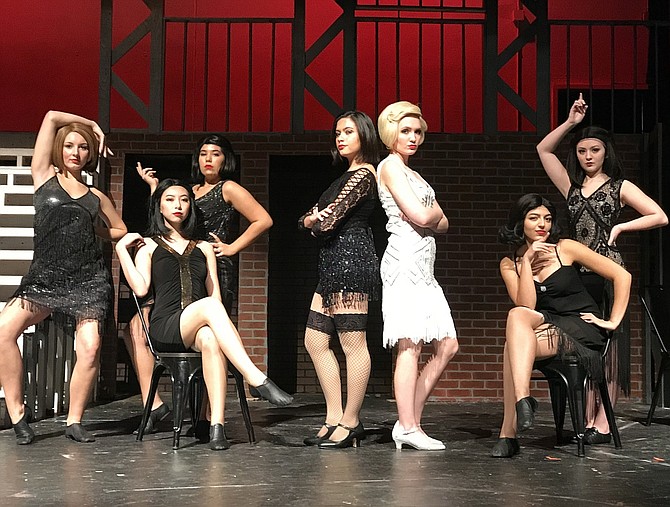 Beginning its theater season on a high note, Chantilly High presents “Chicago: High School Edition.” It’s the school’s Cappies show and features a cast and crew of 75 in a high-energy musical.

It’ll burst upon the stage, Wednesday-Saturday, Oct. 24, 25, 26 and 27, at 7 p.m. Tickets are $15 ($10 with student ID), at the door or via www.chantillyhsdrama.com. It takes place in 1922 Chicago and is a dark comedy about entertainers Velma Kelly and Roxie Hart and their quest to attain celebrity status through the crimes they’ve committed.

“I have two brilliant student choreographers – Lily Black and Anna Rhodes – who’ve truly been the backbone of this show,” said Director Shannon Khatcheressian. “They’ve created some astounding dance numbers that exceeded my expectations.”

Regarding her young thespians, she said, “Everyone fits beautifully into their parts, and the actors and actresses have worked tirelessly. They’re dedicated to their roles and are lighting up the stage while bringing their characters to life.”

And doing that literally are the show’s lighting designers, Christine Cook, Eva Clawson-Keeton, Norman Stavridis and Zoe Hutcheson. Said Khatcheressian: “They’ve created a visual masterpiece that complements the mood and action of the story.”

Right from the start, she said, “This is a lively and engaging show. Besides the enticing storyline, it’s a visual feast for the eyes, with the incredible lighting, beautiful costumes and electric singing and dancing. It’s a production everyone is sure to enjoy. We have a female-heavy department this year, with a lot of strong singers and dancers, so this musical is a great way to showcase their talents.”

Playing Roxie is senior Lauren Spiers. “She’s bubbly, but also has a dark side,” said Spiers. “She’s hopeful for the best and isn’t afraid to stand up for herself. She’s always dreamed of being a dancer in Vaudeville and dances in a nightclub. But she’s on trial for killing her boyfriend and meets Velma in prison. Velma’s famous for the crimes she’s committed, and Roxie wants to replace her as a famous performer. She just wants what’s best for herself and doesn’t care about anyone else.”

Since Spiers is cheerful in real life, portraying Roxie’s dark side lets her stretch as an actress. Besides, she said, “It’s cool to play her because she wears really cute, stylish costumes. It’s stressful playing a lead, but I really enjoy it because I get to channel myself into her and alter my own characteristics to make Roxie into who she is.”

Spiers’s favorite song is “Roxie,” which she sings. “She’s imagining herself as a performer with backup dancers,” said Spiers. “It’s very jazzy, so I have lots of fun with the vocals and dancing.”

She said the audience will like how all the costumes coordinate with each other. “And they won’t know what’s coming next in the story,” she added. “Everyone in the show is really talented and, together, we make a strong cast.”

Junior Alex Yee plays Billy Flynn, a slick attorney representing both Roxie and Velma. “He’s selfish, out for himself and not compassionate toward anybody,” said Yee. “He uses people to his advantage whenever he can and charms them to get his way. He’s already an established attorney and treats each case like the next, new thing.”

Enjoying his role, Yee said, “I have interesting interactions with my castmates and get to mess with them as the person in power. It’s challenging playing someone so different from myself, but it allows me to expand my character range.” He especially likes the number, “We Both Reached for the Gun,” sung by the whole cast. “It’s active and funny,” he said. “The choreography is energetic, and there’s a lot to see across the entire stage, so it’s entertaining to watch.”

Yee said people should come see this show because “The singing is phenomenal, and the choreographers are incredibly talented and have done an excellent job in a short amount of time.”

Portraying Velma is junior Elise McCue. “She’s a singer and dancer in vaudeville and a very complex character,” said McCue. “Even offstage, she puts on this cool and sultry façade because she wants people to see her in a different light from the way she sees herself. She has a big and brash personality, but feels she needs to prove to the rest of the world that she’s the best at what she does.”

“What I love about her is that she’s not just a one-note personality,” continued McCue. “And as the show goes on, you see her façade crack and get to glimpse her vulnerability and insecurities. She becomes a real person, not just a stereotypical, vaudeville character.”

McCue’s favorite number is “All that Jazz,” the musical’s opener. “It introduces you to the whole, underground world of Chicago, and it’s especially cool because we have such a great ensemble,” she said. “And having that many people onstage really pulls the audience into the story and sets the tone for the show.”

Describing “Chicago” as “not your run-of-the-mill musical,” she said, “The songs don’t just move the story along, but it’s like we’re holding out our hands and inviting the audience into this world. And we’re expressing the show’s complex themes through fun and dynamic numbers.”

Stage Manager Valerie Mellard, a senior, calls it a tech-heavy production. Although the scenes mainly take place in prison and a courtroom, she said the women’s costumes are “vibrant and glittery — not what you’d really see in a prison. And the men are a combination of dapper and ‘West Side Story’ masculine, wearing everything from suits, hats and suspenders to muscle shirts.”

Mellard said the audience will love the musical numbers. “It’s intense choreography for high-schoolers, but we pull it off really well,” she said. “People will also be impressed by how upbeat we portray a murder. We show the back-room manipulations that happen in criminal cases, and the sensationalism of the crime will remind people of the O.J. Simpson trial. We focus more on the entertainment of the case, rather than the repercussions of such a serious crime.”