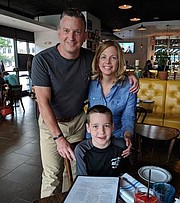 The prospect of cancer in any form strikes fear in everybody. As a result of this pervasive concern, there is widespread awareness of both preventative measures and warning signals. But, what about other common life-threatening diseases and conditions that simply aren’t on enough people's’ radars?

For instance, thrombosis – the formation of blood clots within a blood vessel – is a condition that every year affects hundreds of thousands of people in the United States alone, according to the Centers for Disease Control and Prevention (CDC). Up to 100,000 of these Americans die of pulmonary embolism caused by deep vein thrombosis (DVT/PE). To put that figure into perspective, thrombosis kills more people than does breast cancer, motor vehicle crashes, and AIDS combined.

Arlington resident Scott Shields, an official ambassador for this year’s World Thrombosis Day, which was Oct. 13, is a 17-year survivor of DVT/PE. He suffered his first blood clot at just 32 years old while recovering from a life-threatening car accident.

“I got hit by a car in 2001 as a pedestrian,” Shields said. “I was in traction for two months, so I couldn’t move. During that time, my right leg had to be elevated all day, every day. Then one day, when one of my doctors was setting me up with an IV to deliver medicine, the needle didn’t go in directly and must have nicked the wall of the vein. The next day, my leg was really swollen, so it was immediately apparent to the doctors that I had a blood clot.”

Shields was surrounded by a team of doctors dedicated to his care, so the blood clot didn’t pose the same risk to him as it might have for others.

“When Scott was in the hospital, I realized how dangerous something as simple as a blood clot could be,” said Karen Oliver, Shields’s wife. “Blood clots can happen to anyone. There are so many people that falsely think blood clots only happen to older people. It’s so important to be mindful and recognize the risks.”

According to the World Thrombosis Day campaign website, hospitalization is associated with about 60 percent of these clots because long periods of immobility reduce blood flow. Blood clots then can cause heart attacks, strokes, and venous thromboembolism – a condition that occurs blood flow to the lungs is blocked.

Even though Shields narrowly escaped death from his car accident, and then also survived DVT, he didn’t come away scot-free from a traumatic combination of events.

“Because of the blood clot, I couldn’t have physical therapy on my leg, which really disrupted my recovery,” Shields said. “Not being able to have that physical therapy right away, I permanently lost range of motion in my knees and shoulders due to a tightening of the ligaments.”

On top of that, Shields will spend the rest at greater risk for getting more blood clots.

“What happens with a blood clot is, it stretches out the vessel walls permanently,” Shields said. “It also weakens the valves in your veins, which all just makes you prone to another one. Eight years ago, I was at the gym when I felt what was like an eight-inch cable under the skin on my leg, in the same place that my first clot had been. Sure enough, it was another.”

Shields takes daily blood thinners and exercises regularly to stave off more clots. At the same time as remaining active, though, he must also exercise caution.

“If you read about the blood thinner I take, you’ll see that it’s a medication that a lot of doctors are hesitant to prescribe,” Shields said. “It requires a very special diet and frequent testing. I also have to be very aware and cautious, because injury is so much more complicated when you’re on blood thinners. I love martial arts, for example, but I have to be careful, and monitor how I feel after getting hit in the head or experiencing anything high impact. It’s always in the back of my mind because my risk of an uncontrolled brain bleed is so much higher. I also always have to be worried about getting another blood clot.”

Some people are genetically disposed to getting blood clots, but this was not the case for Shields.

“People with that genetic profile are more prone to get blood clots before ever getting one, and you can get tested with VTE screening,” he said. “I was tested after my second clot, and that was not my situation.”

One alarming thing about a deep blood clot is that there are often no obvious or distinguishing symptoms — especially when you have no clue what they might even be. So, getting tested for a clotting tendency, especially should you find yourself in the hospital unexpectedly, could save your life.

“Neither of mine were painful, which is actually scary,” he said. “Pain is very important because it is a signal from your body something is wrong. People might not know what’s happening to them.”

Then, without knowing that something could be happening inside your body, that lack of action is what can make blood clots deadly.

“If blood clots are left untreated, there is a risk that the clot will dislodge and go to the lungs,” said Shields, who has become an expert of sorts. “If the clot travels from the leg to the lungs it can cause a pulmonary embolism. When this happens, it can cut off the blood supply to a part of the lung, causing difficulty breathing. The clot can also go to the brain and cause a stroke, or to the heart and cause major issues there.”

Shields is a proud ambassador for World Thrombosis Day and also remains a source of support for others who have had similar experiences to his.

“I’m happy to be an ambassador for the World Thrombosis Day campaign,” he said. “I’ve been involved with the National Trauma Society for a long time, too. I got to help start the Trauma Support Network, and DVT and VTE survivors are certainly a part of that.”

With two blood clots in his rearview mirror, five fused vertebrae in his back, a leg that has undergone multiple surgeries, and a heart that stopped and had to be restarted 17 years ago, Shields doesn’t take anything in for granted. He also doesn’t let anything stand in the way of living life on his own terms.

“I was, and will always be, an active participant in my own recovery,” he said. “I’ve been interested in health and medicine for as long as I can remember, being pre-med in college and a longtime healthcare consultant. I’ve always been optimistic, too. I’m doing everything I can to lower my risk with diet, exercise and medication, so I’ll continue doing the activities I love knowing I take all necessary precautions. One thing I’ve learned from accident is that you can be healthy and happy and doing everything right and then, anyone can be hit by a car. You just have to understand risk factors in your life, lower them as much as you can, and move on with your life doing the things you want to do.”