Be Ready for the Marine Corps Marathon
Votes

Be Ready for the Marine Corps Marathon 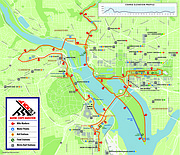 The 43rd Marine Corps Marathon (MCM) and the MCM 10K will take place on Sunday, Oct. 28. Opening ceremonies for the MCM begin at 6 a.m., with the wheelchair/hand cycle division starting at 7:40 a.m., on Route 110 in Arlington.

The following road closures will take place in Arlington County on race day:

At noon on Saturday, Oct. 27, N. Kent Street will be closed from Wilson Blvd. to N. 19th Street and will re-open at the conclusion of the MCM on Sunday, Oct. 28.

Street parking in the area of the race will be restricted and motorists should be on the lookout for temporary “No Parking” signs. Illegally parked vehicles may be ticketed and towed.