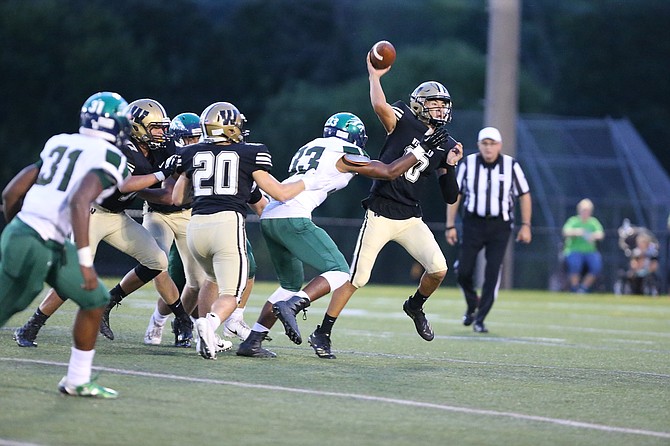 Noah Kim #10 looks to elude the rush of a South County defender. Photo by Will Palenscar 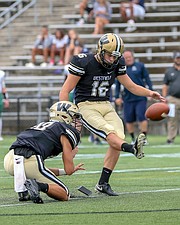 Bizzet Woodley #17 avoids being brought down by a South County defender. 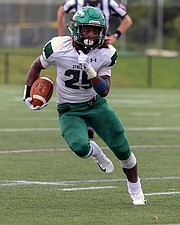 The Westfield Bulldogs and the South County Stallions have battled it out on the gridiron for the past three years. Westfield has won 3 of the 5 games they have played against the Stallions, including playoff wins in 2015 and 2016.

Over the same time frame, the two teams are two of the area’s best team’s year in and out. South County has a combined record of 26-11, while Westfield has won 43 and lost 3, and won three consecutive state 6A State titles.

On Friday night, Aug. 31, the Stallions struck first as they were able to get into the end zone with 7:37 to play in the opening quarter. The Bulldogs special teams got a little revenge when senior Saadiq Hinton blocked the extra point.

In the 2nd quarter Westfield would get on the board when senior Riley Nugent kicked a 22-yard field goal to bring Westfield within 3, 6-3.

In the 3rd quarter, Bizzett Woodley put the Bulldogs into the end zone with 9:11, his third TD reception of the short year, and giving Westfield their first lead of the game, 10-6. The game was then postponed due to lightning with 6:25 to play in the 3rd. When the game resumed on Saturday, Westfield went back to what was working, getting the ball to the 6’4” Woodley for his second score of the game. Later in the 3rd quarter, Woodley would add his third TD reception, with 4:40 making it 24-6.

South County would make things interesting after they reached the end zone with 11:53 to play in the 4th quarter, bringing the score to 24-12, but failed on a two-point conversion. Bulldog penalties and a South County successful onside kick recovery made the home team and their fans a little anxious. However, Westfield would not be denied their 26th consecutive win.

Westfield was led by QB Noah Kim who passed for 212 yards and 3TD’s on 19-30 passing. Bizzett Woodley had 9 catches for 139 yards and 3 TD’s. Gavin Kiley caught four passes, Taylor Morin brought in two more and Isaiah Daniel brought in another. Stats were not available for South County. South County falls to (1-1) and hosts Centreville (2-0). Westfield (2-0) has a bye week, and in two weeks will travel to play Stonewall Jackson. Riley Nugent and some of his teammates plan to use their bye week to watch some of the other teams in action. Nugent thinks “Centreville will be the team’s greatest challenge of the regular season. Their team has been playing really well."