Opinion: Letter to the Editor: Development’s Side Effects
Votes

Opinion: Letter to the Editor: Development’s Side Effects

At the corner of Harvard and King streets, one block from the King Street Metro Station, demolition of the old Naval Reserve Building has been completed and now construction of the new Hyatt Hotel has begun. [Photo below.] Deep digging has begun to provide one level of underground parking. Three trees on Harvard Street have been cut down, but the London Plaines tree has been saved and will be transplanted on Cameron Street. 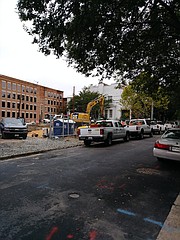 Construction at corner of Harvard and King Streets.

Large trucks have been coming continuously down Harvard Street to pick up excess dirt. Harvard Street was just repaved but is already taking a battering from the trucks. The alley behind the homes on the western side of Harvard has also been closed and residents on that side can no longer park behind their homes. Also before closure of the alley, this was about the only way to get to Harvard Street from Cameron Street. And I was among those that used that path, but not for the better. The last time I used it my car got caught on top of a tree stump and I was unable to get it off. The undercarriage and the door were damaged and the repair bill was $1,400 which I paid.

In addition, many of the trees on Harvard Street have gotten an unwelcome haircut. Many large branches have been ripped off these 50-plus year old trees by the truck traffic. Part of Harvard Street was dug up for a new utility line and the next thing we know is that my neighbor’s basement was flooding. For the past many weeks, we have had minor seismic disturbances not associated with any earthquakes .. .just truck and site work. Remember these are century old buildings and who knows how many "quakes" these houses can take before something happens to their structural integrity.

Every morning when I go out for an early morning walk, what do I see … a front porch and sidewalks covered with dirt and dust and a street full of cars needing a fresh wash and wax. In addition, debris is continuously left overnight on-site, just waiting for the next wind storm to throw it our way.

This is all as a result of the City Council approving this project earlier this year. The neighborhood residents protested and signed petitions to stop the project, but the council would not listen. Instead, they listened to the investors with deep, deep pockets. Now, the Planning Commission has another big development under consideration just across the street at 1601-1614 King Street; a 49-unit condominium with two levels of underground parking. So we could be in for this for almost endless years to come.

But … we now have an opportunity to end this neverending insanity. In November, we will be electing the next City Council for this city. I urge you to vote and I urge you to use this opportunity to rid ourselves of the two remaining council members who have been instrumental in supporting this craziness: Ms. Del Pepper and Mr. John T. Chapman. We need to elect council members with fresh ideas, who want to defend and restore the historic nature of this city. We need the likes of Mo Seifeldein, Canek Aguirre, Amy Jackson, and Elizabeth Bennett-Parker.