Historic Burke family grave has been target of vandals over the years. 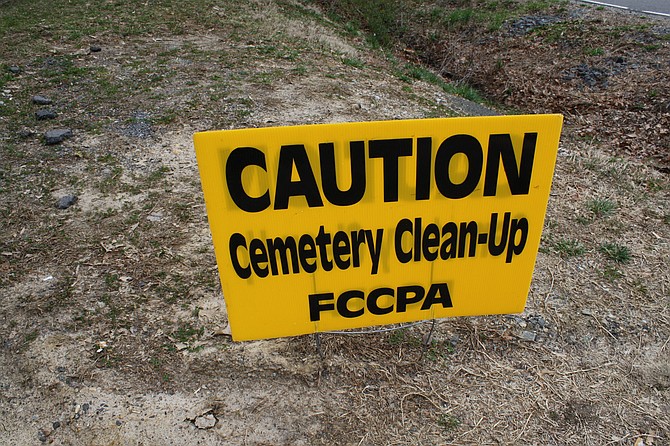 The Marshall Cemetery in Burke gets a cleaning. Photo by Mike Salmon.

Members of the Marshall family, Burke Historical Society and student history group broke out the weed trimmers and shovels to beautify and 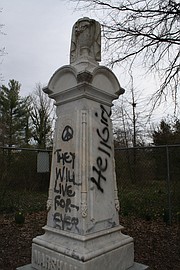 preserve the Marshall Cemetery in the older part of Burke on Saturday morning, sharing local history in the process.

Mike Young, a Marshall descendent, brought a sabre from the Civil War that was passed down through from Marshall descendants. As the story goes, the sabre was found on the body of a Civil War soldier that was wounded and crawled under the porch of the original Marshall house that stood on a spot not too far from the cemetery.

“The initials on the footstone match this,” Young, pointing to an engraving on the sabre sheath. said. The footstone he’s referring to once was part of the Marshall Cemetery marking the soldier’s grave that was once in the cemetery. “The house used to be right here,” Young said, pointing to an area just east of the graveyard. The soldier was from New York so he was thought to a Yankee, and his body was eventually re-interred in New York.

The original Marshall house was built in 1850, and Glen Curtis, a descendant of the Marshall’s was born near the house location. “I was born over there where the old house used to be,” he said. He remembered too the soldier’s grave. “There was a Union Civil War soldier buried in this corner,” he said.

John Marshall, 1821-1892, and Mary J. Davis Marshall, 1826-1887, are some of the original Burke founders and John Marshall was the postmaster of Burke Station from 1852-1854. They are both buried in the cemetery on either side of the obelisk. There is a sign on the surrounding fence explaining the Marshall story. 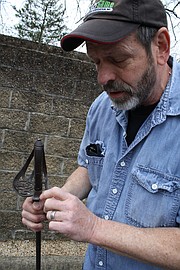 Mike Young, a Marshall descendent, with a sword that was found on a dead Civil War soldier that was found under the Marshall porch, which was once located near the cemetery in Burke.

Across the road where the original post office was, Curtis noted another Civil War moment. “This is where Jeb Stuart sent the telegram to the Yankees to complain about the quality of the mules captured,” he said.

The historic chatter was just a sidebar to the work accomplished at the graveyard where all the underbrush was cleared and the site was neatened up. The actual gravestone was not touched though, they were leaving that for more professional hands. Three different “gravestone guardians” have been hired to remove the graffiti with limited success. It’s not just as easy as splashing on some paint remover though. The stone is made of marble so it is not as durable as other gravestone materials.

The berm to the railroad line that came through Burke stands just outside the fence. Written on it were messages such as “Hell Girl,” a peace sign, “Joe,” “LS RIP,” and “They will live forever.” Lipsy pointed across the yard. “There was a marijuana leaf over there, that was taken off,” she said. Defacing a gravestone is not legal and the graffiti artists could face charges.

The clean up crew consisted of several members of the Burke Historical Society, family descendants and a group of students from Lake Braddock who were part of the Historic Honor Society. Students included Amy Smith, 17; Nathalie Vadnais, 17; Areebah Johia, 16; Hana Rehmon, 16; and Emily Key, 17. “This is our first project,” said Key.

There are daffodils sprouting up all over the area and those probably were planted by a gardener from another time. This perennial plant grows from bulbs. “These flowers have been coming up for years, who knows how long,” Curtis said.

According to the police, vandalizing a cemetery is a Class 6 felony. Virginia law 18.2-127 “Any person who willfully or maliciously destroys, mutilates, defaces, injures, or removes any object or structure permanently attached or affixed within any church or on church property, any tomb, monument, gravestone, or other structure placed within any cemetery, graveyard, or place of burial, or within any lot belonging to any memorial or monumental association, or any fence, railing, or other work for the protection or ornament of any tomb, monument, gravestone, or other structure aforesaid, or of any cemetery lot within any cemetery is guilty of a Class 6 felony. A person convicted under this section who is required to pay restitution by the court shall be required to pay restitution to the church, if the property damaged is property of the church, or to the owner of a cemetery, if the property damaged is located within such cemetery regardless of whether the property damaged is owned by the cemetery or by another person.”