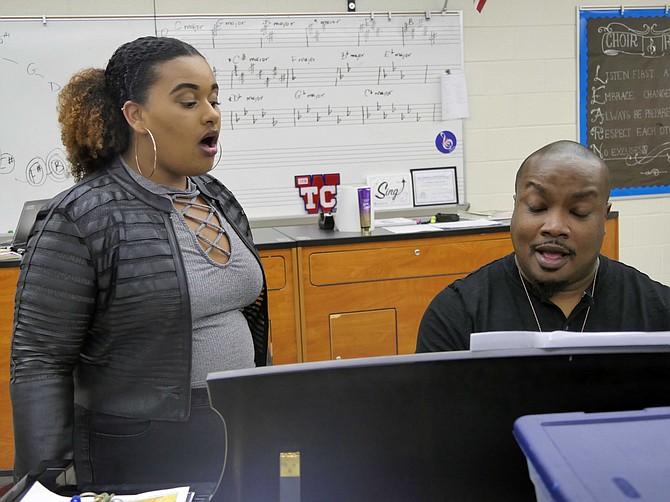 "Ah ah ah ah ah" in ascending notes as Mia Hall stands by the piano in the music room breathing from the diaphragm and practicing her scales. She moved to Alexandria from Maryland at the beginning of her junior year. "I heard TC had a great choir and I did research on the website. They had an amazing bio, all of the things they had done."

So Hall decided to try out for the choir. She walked into Room C120 where she had to perform an audition. "Mr. Thorpe was sitting at the piano when I walked into the room. He was very intimidating. He had me do scales and then asked me my background and then said 'I'm going to put you in advanced choir.'" Hall was surprised and excited at the same time. From there Hall went from a terrified new choral student to a leader of the elite T.C. Williams advanced choir in two years.

Theodore Thorpe, TC choir director, says that all of the school counselors refer students to him who say they can sing. "I take it with a grain of salt." But Hall came with "very raw skills. Some students have natural vocal ability but no discipline, while others are hard workers but don't have the talent. Every once in a while you find an extremely talented student who is an overachiever. That's her. She is a gem."

Hall remembers walking into the room the first day of class. She says Thorpe can be intimidating until you know him. "Everyone said in unison, 'Good morning Mr. Thorpe.' I gulped and said 'Good Morning Mr. Thorpe.' I was so confused I sat in the wrong section. I sat with the sopranos." Thorpe says that Hall sings contralto in the choir but her voice ranges to mezzo-soprano.

Hall says it took a lot of getting acclimated to a new school where the students already had their own friends and their cliques. "The first 3-4 months were pretty rough. I didn't fit in and I struggled with sight-reading.” She thought about moving back to Maryland but now she is glad she didn't. "People here helped me so much. My section leader helped me with reading music. I knew I was in a safe place."

Hall says in the high school in Maryland she was the only one in her music class of 10 students who took music seriously. "It's different here, where discipline and hard work are important. At my previous school, people talked over the teacher and didn't care. Here everyone respects Mr. Thorpe."

Thorpe says he came from a musical family. "My mother sang at Carnegie Hall and my father was a choral and orchestra conductor in New York. "My journey was a little unorthodox. I studied biology and I planned to go to dental school. "You know you were supposed to be a doctor or lawyer so you could pay your bills." But luckily a relative dissuaded him in time and now he says, "There's nothing like pursuing your passion. I'm one of the lucky ones."

Thorpe says when he applied for the position as choral director at TC he told them, "If you let me do things my way, I'll make this the best program in the state." Now the choral program has grown from a handful of students with a piano tucked off on the side to a thriving program of 120 students who comprise one of 10 high school choirs recently selected by blind audition for the national "Music for All" in Indianapolis. "We're setting up for the World Choir Games in Brussels in 2020 where we plan to compete in several categories.” Hall says they are still selecting the participants for that choir including some alums.

Thorpe said choir teaches you life skills, how to manage a group and get along together. Hall, as vice president of the choir, says she uses these skills to lead warm ups or start the class doing scales before Thorpe arrives. "It's pretty cool."

Hall says she has been singing since she was in kindergarten and remembers being in her first play in 8th grade. "It was ‘Hair Spray.’" Now she is practicing for her role as LeFou in “Beauty and the Beast” being performed at TC on April 26-27. She has just applied to VCU Arts for their undergrad program in musical arts. Her goal is to be a Broadway performer "and I know I can do it. I'm following my passion."