No City an Island?
Votes

No City an Island? 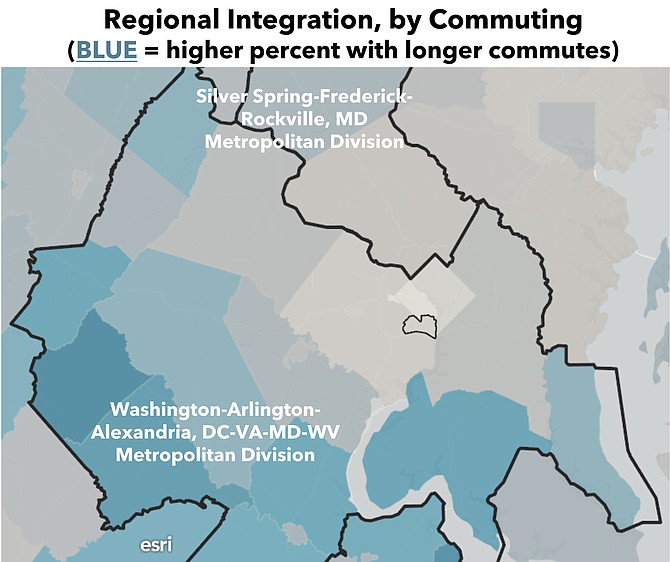 A Metropolitan Division is a subset of a Metropolitan Statistical Area, which federal agencies use for statistical purposes. An area and its divisions comprise a highly populated urban area “having a high degree of social and economic integration with the [urban] core as measured through commuting ties,” according to the U.S. Census Bureau. Map sources: U.S. Census Bureau; ACS 2013-2017 5-year estimates, Table B08303; Esri; City of Alexandria, GIS Open Data Hub.

City Council adopted a resolution affirming its “commitment to regionalism,” the first such formalized local pledge from within the metropolitan area, but with little in the way of specifics.

It follows that the city “recognizes the interests for the good of the region are often paramount compared to the interests of an individual jurisdiction. … The city … pledges its best efforts and faithful cooperation in working with other jurisdictions and regional bodies … in addressing regional issues, and designing and implementing regional policies and plans.”

“Regionalism is more a concept [and ‘a guiding principle’] than a formal program,” said City Manager Mark Jinks in a memo. “Regionalism means considering and adopting the best policies for the region, and not just those policies that may be best for one’s own locality.”

“We have to realize we’re a piece of a bigger puzzle,” said Councilman Canek Aguirre, who’s championed regionalism since his term began. “We might be a small jurisdiction, but we have a lot of influence, and this is a clear example of … [our] helping to lead.”

Aguirre says that, even though local politicians ultimately answer to local constituents, regional issues need attention too. He sees the resolution as helping to induce a more regionally collaborative culture in Alexandria, as well as “sending a signal to other jurisdictions.”

For example, he wants localities to pitch in on shared advertising campaign along inter-jurisdictional transportation routes, urging people to participate in the upcoming decennial census. He also sees cut-through traffic in Alexandria neighborhoods, a common complaint from residents, stemming largely from passing-through regional commuters, the volume of which Alexandria ultimately exercises little control.

Chuck Bean, executive director of the Metropolitan Washington Council of Governments, says his organization “supports efforts like this by its members that emphasize the need to collaborate on regional issues.” The Council of Governments, a nonprofit, serves as a kind of clearinghouse for local governments to share information and maintain relationships.