People At Work: ‘Where I Connect with Life's Purpose’
Votes

People At Work: ‘Where I Connect with Life's Purpose’ 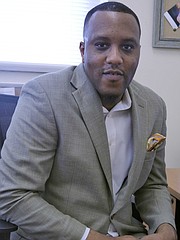 Randy Gore spent the morning reconciling invoices and receipts as part of his fiduciary obligation. But last weekend, "We had our annual spring production. This year it was ‘Aladdin Junior,’ and I was working backstage giving vocal lessons, helping kids learn their lines and directing the show." This afternoon he will be meeting on the Campagna Kids summer camp program to finalize the details of the field trips. "We have three field trips a week like Port Discovery in Baltimore, Imagination Stage in Bethesda, and Six Flags." As senior director of the Campagna Center's Out of School Time Programs, "I get to do a bit of it all."

"But the joy of my job is going out to the sites to see our children. They know me by name. I'm not just a voice in an ivory tower." Campagna Kids has sites for before and after school programs in 11 schools across Alexandria.

"Our program is one of Alexandria's jewels," he said. It provided before and after school programs to more than 900 children in the City of Alexandria this year. He says the enrichment programs range from musical theatre to sports like basketball and soccer, to sign language, 3-D printing, visual arts and chess. "Our chess team won eight consecutive titles in a national championship."

He said, "We get more detailed about their interests and kids this year are interested in technology so we're working to refine that. We design enrichment to get what they want." For instance, he points out they have a robotic team which builds robots that compete to perform a mission within a specified time period.

Gore started at Campagna Center in 2006 as a part time job when he was in school. "I didn't think I would be here that long but I fell in love with the work. I came in as an entry-level assistant group leader. I still remember the first kindergarten class at Douglas MacArthur, how excited they were to be there." Gore says he was a latch key kid and "I went home and waited for my parents." He wishes he could have had a program like this when he was growing up.

Gore advanced to assistant site director, site director, director of operations and now senior director of Out of School Time Programs where he has been for two years. He said, "I have a passion for the arts and was a vocal major. I found I could use my skill set and bring it to the job here."

The Campagna Kids program "is not school, not home. It's unique. We don't have children in front of a video game." Gore says adults used to come up with everything, but now they have very detailed programs geared to the interests of the children.

"I like to call myself a program designer. I drive a lot of what happens with the highest level of quality so that children can enjoy coming here every day." He wants to give them a positive experience in life.

He says he remembers when he did his first play with the kids. It was a play they wrote for Black History month about helping a Black child understand how he got where he is today by going back in a time machine. "That's when I knew I was here to stay. When kids aren't interested, they aren't interested" but his job is to find out what excites them and do it. "Now we're licensing our junior shows. We have costume designers."

Gore comments that Campagna Kids levels the playing field for the diversity of their students to assure that all children have access to the same quality of programs. Parents are charged on a sliding scale from $23 up to $425 a month. The program is funded through the City of Alexandria and the Alexandria City Public Schools.

"This is where I'm supposed to be, where I connect with life's purpose," Gore said.