President Franklin D. Roosevelt’s administration commissioned artwork in Post Offices across the nation to provide jobs to artists and illustrate the history and culture of local communities. 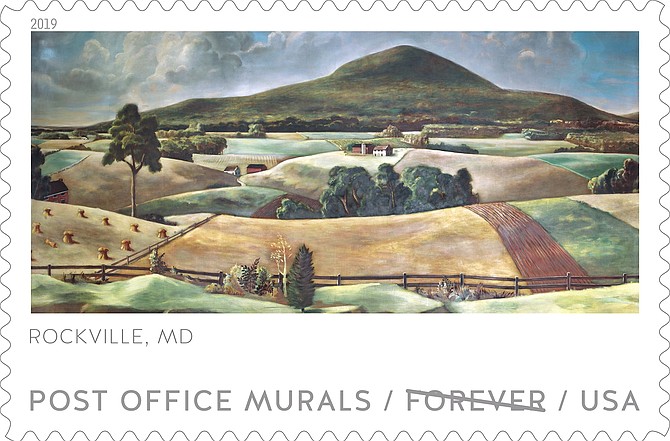 The U.S. Post Office printed 30 million Post Office Murals stamps, including a mural of Sugarloaf Mountain, described as “a landmark visible from many parts of northern Montgomery and southern Frederick Counties in Maryland.” The Post Office Murals Forever stamp series was issued on April 10, 2019.

The stamps feature five government-commissioned artworks from the 1930s and 1940s featured in Post Office lobbies. President Franklin D. Roosevelt’s administration commissioned artwork in Post Offices across the nation to provide jobs to artists and illustrate the history and culture of local communities across America. These works of art were designed to help boost the morale of Americans during the Great Depression, and reported were funded by allocating one percent of construction cost for art.

The mural, entitled “Sugarloaf Mountain,” was painted by Judson Smith and can still be seen at the Rockville City Police Station on W. Montgomery Avenue, a building once home to the Rockville Post Office.

This pane of 10 stamps features five different murals. On the stamp art, the town or city and state in which the work of art is located is printed underneath each mural. So the Sugarloaf mural stamp says Rockville, Md.

The origin of Post Office murals can be traced back to 1933. That year, in a letter to longtime acquaintance President Franklin D. Roosevelt, artist George Biddle suggested that the U.S. government should commission artists in need of work to enliven the walls of public buildings. Later that year, the Roosevelt administration established the Public Works of Art Project. Funded by the Civil Works Administration and overseen by the Department of the Treasury, the New Deal program led to the hiring of more than 3,700 artists.

Under Public Works of Art Project leader Edward Bruce, the artists were encouraged to depict an American scene, a style of painting that eschewed modern trends and focused on the idealized portrayal of daily life in America. In less than a year, the artists created thousands of murals, stand-alone paintings, and sculptures.

Following the expiration of the PWAP in 1934, the U.S. Treasury formed the Section of Painting and Sculpture. Eventually renamed the Section of Fine Arts, the Bruce-helmed initiative sought to brighten newly built Post Office locations and federal buildings. From 1934 through 1943, the Section commissioned more than 1,000 murals. From 1935 through 1939, the Treasury Relief Art Project also funded a small number of murals at existing Post Offices. The buildings were some of the country’s most widely trafficked public spaces, which meant many people could enjoy the murals.

The Section of Fine Arts folded during World War II, but not before commissioning murals for Post Office locations in all 50 states, the District of Columbia, Puerto Rico, and the U.S. Virgin Islands.

The Post Office Murals stamps are being issued as Forever stamps and will always be equal in value to the current First-Class Mail 1-ounce price. The Postal Service receives no tax dollars for operating expenses and relies on the sale of postage, products and services to fund its operations.