State moves ahead with proposals for extra lanes on Beltway and 270, presents options at citizen meetings. 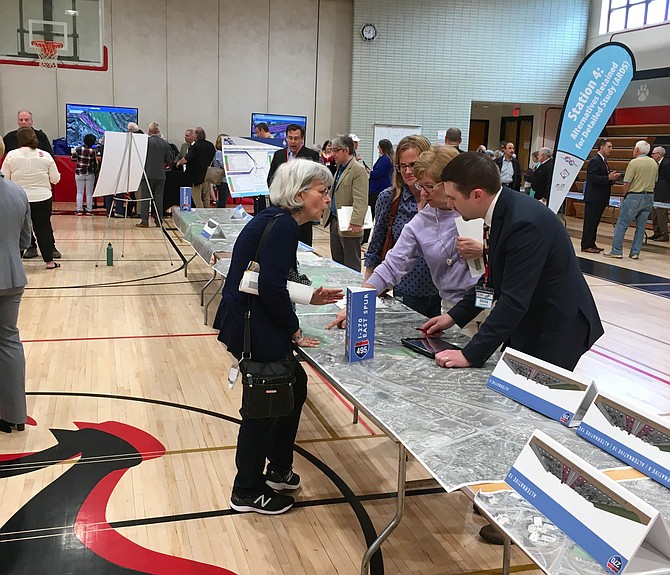 Scores of people attending the workshop on proposals to widen the Beltway and I-270 spread out at different exhibits around the cafeteria of Pyle Middle School in Bethesda. Photo by Peggy McEwan

Several hundred people met with Maryland Department of Transportation State Highway Administration planners on Saturday, April 13, 2019, at Pyle Middle School in Bethesda to learn about State plans for I-495 and I-270.

They were there to learn about alternatives to improve traffic flow, relieve congestion and allow drivers to spend less time commuting, more time enjoying life.

How to get to that point seemed as difficult as driving the roads during a rush hour snowstorm.

The formal presentation offered twice on Saturday by Lisa Choplin, project head, and Jeff Folden, responsible for project development and delivery, included statistics on travel times, congestion now and in the future, and slides showing a confusing number of alternative solutions.

Confusing, in part because the project started with 15 alternatives in 2018, according to Folden, and is now down to seven, but the numbers haven’t changed. Coming back from little daydreaming and hearing about number 13-B gives pause: “I thought there were only seven!”

Every option except number one, which is to leave everything as is, offered some form of toll lanes.

That does not seem right to Hija Yu, of Kensington. She said she feels toll lanes only benefit those who can pay.

“I think if they are going to widen highway lanes, I don’t think they should have toll lanes,” she said. “If they need to create more lanes, they need to benefit all.”

Presentations state that the project would be funded through a public private partnership (P3).

Nick Brand, outside of the school representing the Action Committee for Transit, said his group is in favor of improving traffic on I-270 by getting MARC Trains to run all day in both directions. MARC Trains currently only run during the morning and afternoon rush hours.

“It would provide the capacity of several lanes,” he said. “It would be less costly and have less impact.”

More can be learned at www.ACTforTRANSIT.org.

Another group outside the school, talking to people as they came and went, was Citizens Against Beltway Expansion joined by Sierra Club Maryland Chapter.

The group distributes a paper: Myths and Misperceptions Regarding the MDOT Plan for expanding I-270 and I- 495, challenging the highway expansion plan. It also encourages citizens to “demand” answers to the current plan.

Myth? Congestion on I-495 and I-270 will disappear by adding 2 toll lanes in each direction.

Myth? The State of Maryland and its taxpayers will not be financially liable if tolls do not cover the needed costs (assuming private financing).

Myth? Highway expansion is the only “concrete” solution to rush-hour congestion.

Myth? The forest buffer and adjacent properties will remain because the project will stay within the existing road footprint.

Myth? We need to rush this plan through, or Marylanders will pay more.

Myth? The public is powerless to affect the outcome.

For more information about these arguments against the State proposals, visit CABE495.com

Six more MDOT workshops are scheduled for this spring. Closest to the Potomac area is the one planned for Thursday, April 25 from 6:30-8:30 p.m. at Thomas Wootton High School, 2100 Wootton Pkwy, Rockville.