Wexler’s book lays out her dilemma with feminism vs. the Catholic Church. 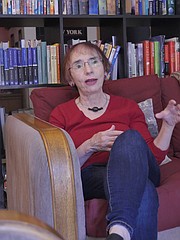 Celia Wexler is on a journey. Her struggle with whether she could continue to be a feminist and a practicing Catholic came to a head in 2014 with Pope Benedict’s conservative views. He issued a doctrinal assessment proclaiming that nuns were radical feminists who spent too much time helping the poor and not enough time fighting abortion. He assigned three bishops to monitor their behavior. "That really got to me."

Wexler has written a book about that struggle, "Catholic Women Confront their Church: Stories of Hurt and Hope," in which she tells stories of Catholic women through the lens of their personal experience. She says, "This is my perilous journey."

The process started with a question, and she wanted to get a sense from other women she admired, women who wanted to stay in the church but were struggling. "Not all of them stayed Catholics. I was extra-fortunate that people were willing to spend a lot of time for interviews of several hours and sometimes follow-up. Most of the women I didn't know."

Chapter 9 was about Barbara Blaine, who died tragically before the book was published. She had been abused starting when she was 13 by the assistant pastor of her church, and felt guilt about not being good enough because she didn't know it wasn't her fault. After four years, she broke free but carried a terrible burden.

Wexler says It got buried and didn't surface until she was 29. "She could have spent the rest of her life healing but she was not like that so she would speak to bishops. Only one listened to her but she didn't give up. She was an amazing Catholic. She was so kind and loving. The church had broken her heart."

Chapter 2 tells the story of Sister Simone Campbell. Campbell is director of NETWORK, a Catholic social-justice lobby based in Washington, D.C. “so prayerful but such a good lobbyist.” Wexler says Campbell talked in sound bites but was so profound with an amazing sense of humor. “She said she decided to reform Congress because it was so much easier than reforming the Catholic Church.”

Wexler says she felt it was important if she was going to ask these women to share their stories that she should share her own. The first chapter of her book chronicles her own experience with the faith of her father which "was not a warm and fuzzy faith" through the scary nuns of her childhood to her teenage progression with the war between mind and body and the endless vigilance against “impure” thoughts.

The first chapter says her conflicted feelings about the church grew more pronounced when “I moved to Northern Virginia in 1996. Walking into a Catholic church in Alexandria, Virginia, was like walking into the 1950s …. the Diocese of Arlington is known for its conservatism and was the second-to-last diocese in the country to permit girls to be altar servers.” Still she says, ”But with all of the pain, the rituals of Catholicism brought great beauty into my life."

Wexler said all of her work was done on the couch in her living room from her little table. "No office." It took about two years to write her second book on Catholic women. She interspersed writing with interviews. Her chapters would go through 12 revisions. "I did a lot of background research, had to learn a lot more about Catholicism, the Vatican, history over 50 years. It was really important that this have some intellectual heft."

She would ask her husband, who is a journalist, for advice and her daughter. "Then I would get mad and accept some of their suggestions." She said it was very important to her to make clear she is not an expert or theologian; she is a journalist and writes what she can substantiate. There were points where she thought, "What am I doing?" but when she got to six profiles, it felt good.

She says it’s a lot easier to write a book than to sell it. But she has a good agent and has had a number of book events where she connects with other women who tell her their stories. “I thought I was the only one.”

Wexler's first book was the award-winning "Out of the News: Former Journalists Discuss a Profession in Crisis," another book about conflicts and struggles. "My husband says, ‘I hope you don't decide to write a book about marriage.’"

She says she was in Rome last September for the launch of "Visions and Vocation" to which she had contributed a chapter. "It opened up another world to me. Women all over the place may have issues but agree women should have a larger role. After all, we're half of the church. We could share what was driving you nuts."

Wexler says she is a cultural Catholic and that Catholic identity starts when you are born. She loves the liturgy and the community of singing in the choir. She believes in the Ten Commandments, "Do unto each other,” and being an ethical person. To give up Catholicism at this point in her life would have been like giving up a part of her body.

She says that faith is bigger than the institution and the Catholic Church is a human institution run by flawed human beings. "I came to the conclusion it was possible to remain a feminist and a practicing Catholic. And yet, it's not like I've stopped struggling."