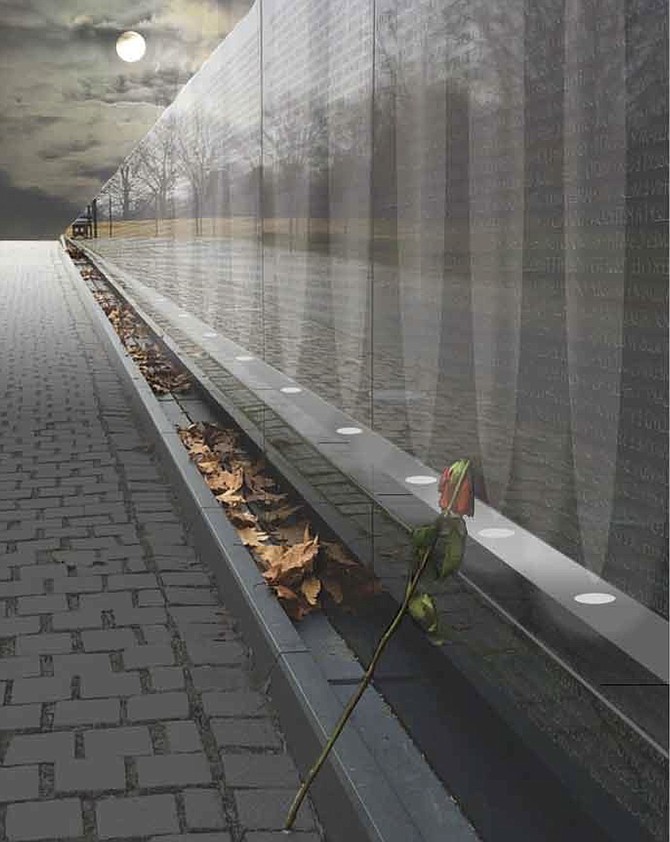 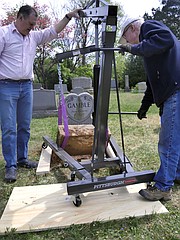 Larry Danforth (right) and Walter Leathers lift the first gravestone in the Walker Chapel UMC 5-7 year renovation of the cemetery.

Larry Danforth cranks the 2-ton hoist three times and stands back a minute. "It's heavier than you would think," he comments to Walter Leathers as they work together to raise the first gravestone in the planned 5-7 year restoration of the historic Walker Chapel UMC cemetery. The dusty gravestone says "Robert Lee 1934-2001; Marie Agnes 1934-2014. Sweethearts Forever."

Danforth, a member of Walker Chapel, says he has been working for a few years planning the Historic Cemetery Project. "There has been a lot of research into who is buried in the cemetery, what spaces are still open, and a global design intended to upgrade and expand the cemetery."

He says the plans call for a new Wall of Memories replacing the current rotted wooden wall that was built in the mid-to-late 1980s. The new wall will run some 150 feet starting at the gate marked Circa 1848 to the cemetery and running down the hill. The wall will be faced with polished black granite and will have space for 900 memory tablets. It is intended to allow people to permanently mark special times or people in their lives that will recreate the memory over and over for them and all who see it.

Danforth says there are 10 major projects in the Historic Cemetery Project, including stone markers and restoration, a reflection garden, a new columbaria design and placement "since people like to be cremated today." Danforth says many community offices and groups are involved from the Historic Affairs and Landmark Review Board, The Arlington County arborists, Master Gardeners, Tree Stewards, Virginia Department of Transportation, Arlington Code Enforcement Office as well as the leadership of Walker Chapel, the District office of the United Methodist Church and their state Sen. Barbara Favola.

Today's project is to restore and straighten the stones and markers worn by time and weather. Danforth says most of the stones are sitting on dirt and sink over time. The process is to remove the gravestone and pour concrete into a form to set a firm foundation. After the concrete is set, they will place the stone back and fill in around it.

Danforth and Leathers started work at 7:30 a.m. on Wednesday morning, April 17 and except for a break for a meeting, he and Leathers finished the gravestone at around 2 p.m. "Our speed improved as we became more familiar with the equipment and the techniques to wrap and lift the stones."

He says they research the gravestones and trace the family tree to find a living relative to see if the relative is willing to fund the restoration since the stones and markers are the owner's personal property. "We started with the two stones that were in the worst condition where we had been successful in reaching a living relative. One was leaning at a 45 degree angle and the other the base had sunk into the ground and the top stone was sliding off."

Currently there are an estimated 676 burials in the cemetery from potential slave burial sites to Nancy Walker's 1883 obelisk lying flat on the ground, to the stone lined with rows of matchbox cars and a plant growing out of a tiny shoe of 3-year old Talmage Cedar Brock in 2013.

Walker was the mother of Robert Walker who, with his wife Margaret, deeded the grounds for the purpose of forming a Methodist church. Danforth says he found her marker under a heavy growth of ivy and boxwoods, flat on the ground but well preserved. Danforth says they also have an obligation to provide burial sites to the community.

In the next 30 days Walker Chapel will be awarding a contract to provide landscape architectural services, survey services, civil engineering services to come up with a global design as well as to obtain Historical Affairs and Landmark Review Board approval and building permits to proceed with construction. Danforth says it will take a major fundraising campaign to fund the project.