Policing the River in Marine Patrol 1 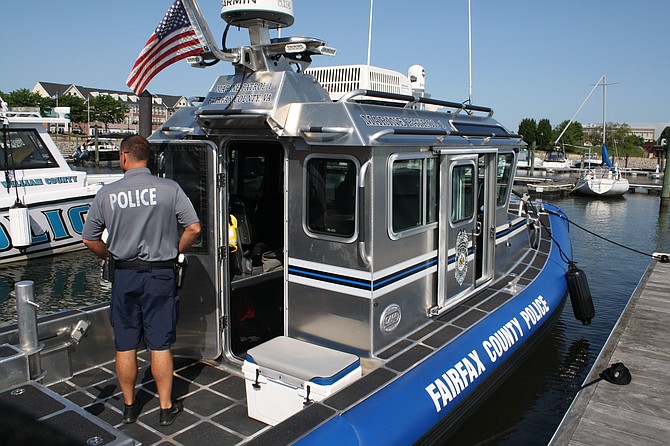 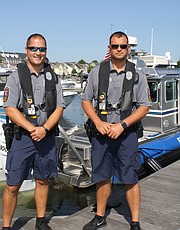 Officers Alan Cordray and Tim Judd at the Belmont Bay Marina, which is actually in Prince William County.

Officer Tim Judd looks at the questionable seaplane in the distance.

The Fairfax County officers discuss the seaplane with an officer from the Maryland Department of Resources.

There’s a narrow channel for the Spirit of Mount Vernon to use to get to the main channel in the Potomac River.

The seaplane is not a common sight on the river, and due to the flight restrictions in the D.C. area, the officers investigated, calling emergency offices and the police helicopter, also involving Federal Aviation Administration officials.

Marine Patrol 1 pulled out of the docks on the Occoquan River, and headed out through the no wake zone to the Potomac River as it does several times a week, but this time was a little different.

The boat is part of the Fairfax County Police Department, and officer Tim Judd grabbed the binoculars as what appeared to be a yellow seaplane was flying low to the water in the distance.

Judd’s partner Alan Cordray commented how each patrol they take on the river was different, but a seaplane was an unusual sight. Due to the river’s proximity to Washington, D.C. and several military bases lining the corridor, there are flight restrictions everywhere and the seaplane caught everyone’s attention.

“This is pretty much a no-fly zone,” he said, adding he had “never seen one out here.”

The low altitude alarmed them as well. “He’s just staying under the radar,” Cordray said, as he pointed the boat down river and accelerated. The plane crossed from the Virginia side to Maryland side of the river, and down Mattawoman Creek, going out of sight. “He knows he’s not allowed there,” added Judd, who manned the radio, calling other units, including the FCPD helicopter, who got word to the Federal Aviation Administration. They pulled up to a Maryland Department of Natural Resources boat on the creek, talked with the officer, and watched the airplane pass over and out of sight. “We’re waiting to hear back from the FAA,” Cordray said. They filled out a computer-based log so their event was recorded, but nothing came of it, and the officers resumed their patrol on the river. Just another day for Marine Patrol 1.

“The way he was dodging, definitely a little interesting,” Judd said.

MARINE PATROL 1 is a full-time job for two county police officers, and a part time gig for a handful of others who come over from other positions on the force, or within the county. Judd, for example, is a school resource officer from Kilmer Middle School in Vienna who is a marine officer who shifts to the boat for the summer. The boat parks in Belmont Bay Harbor Marina, next to the Prince William County boat, and patrols the river from the Woodrow Wilson Bridge down to Belmont Bay, and more when the need arises.

In the case with the seaplane, Marine Patrol 1 crossed over into Maryland waters and into the mouth of Mattawoman Creek.

A majority of the time, MP1 enforces the no-wake rule in Belmont Bay, the Occoquan River, Pohick Bay and out on the river, respond to emergencies, enforce alcohol limits for boaters and encourage safe boating. Fairfax County is responsible for patrolling up the Occoquan River nearly to the town of Occoquan, north to the Woodrow Wilson Bridge and all other inlets and creeks that are considered Fairfax County. When requested, they assist in Alexandria and Arlington waters as well, but the river above Arlington is a little too rocky, and Montgomery County authorities cover that area. At a few points in Fairfax coverage area, the river is more than 70 feet deep.

On a good weekend in Belmont Bay, there are 300 boats so it’s a busy time. As far as the no-wake rule, “you need to be going as slow as you can,” said Cordray. A boat causing a wake in those areas can shake other boats, overturn a fisherman in a canoe, or cause boats that are docked to hit together, causing damage to the hulls. It can be expensive. A big wake causes erosion on the shoreline as well. All boaters need to have passed a boating course if their boat is 10 horsepower or more, and the officers check on that as well.

“We all started as regular police officers on the street,” Cordray said.

On July 4, they got a call that a woman was in distress up near the bridge, so they headed up there and were caught in a thunderstorm. She somehow cut off part of her finger and needed help.

“We’re more or less an ambulance on the water,” Cordray said. “Depends on the day, what’s going on, we’re pretty busy,” he added.

Drinking and driving a boat is “BWI,” and they enforce that as well, but find the boating community helps out with that as well. If they see a fellow boater that’s had too much to drink, they help get the boat back to the docks in other ways, they said.

Marine Patrol 1 is a boat with an aluminum chambered hull, an air conditioned and heated cabin, twin 300-horsepower engines and other special accessories that are needed out on the water, like forward looking infrared radar for seeing things the naked eye cannot. There is sonar for measuring the depth, which is important on the river. “This is not just your pleasure boat,” said Judd. The $350,000 boat was built by SAFE Boat Co. located in Bremerton, Wash.

While the meandering channel is good for boating, there are parts that are not as deep, and in low tide, this can be a problem for a pleasure boat flying along unaware. If they hit a rock or the bottom, “the boat stops but they of course don’t,” said Cordray. “We always have to be wary of the tides,” he added.

AT TIMES, they work with the dive team, a special team of police officers with scuba equipment who dive for body recovery or evidence retrieval.

The waters of the Potomac River here are considered brackish waters, and are partially salt water so crabs can be found almost everywhere south of the Woodrow Wilson Bridge. There are crab pots to watch out, along with other things floating in the water. The ideal time for crabbing is late summer when the water is saltier, and poaching crab pots is “a felony in Virginia,” Cordray said.

There has been talk of a high-speed ferry to carry commuters from Prince William County to Washington, D.C. but for such a boat to leave the Occoquan River and head north, they would most likely have to be exempt from the wake rule to keep with a commuter schedule, and this could cause problems. The marine patrol looked at the parameters of the proposed ferry, and Cordray feels “there would have to be some major changes,” he said.