Protesting ‘Whites Only’ Library in Alexandria 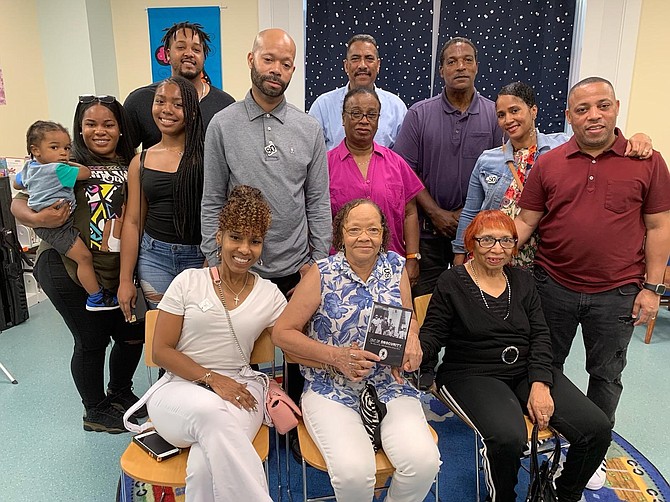 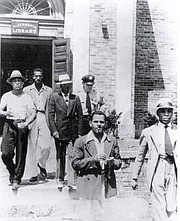 William "Buddy" Evans, at left, Otto Tucker, Edward Gaddis, Morris L. Murray and Clarence "Buck" Strange are escorted by police out of the “whites only” Alexandria Library on Queen Street after requesting a library card on Aug. 21, 1939. 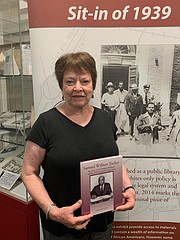 Nancy Noyes Silcox holds a copy of her book “Samuel Wilbert Tucker: The Story of a Civil Rights Trailblazer and the 1939 Alexandria Library Sit-In.”

Kimberly Evans-Reed was confused. She couldn’t understand why her brother was being escorted out of a building by a police officer. But her mother told her to look again at the photograph. It was dated Aug. 21, 1939, and the familiar face in the photo was her grandfather, William “Buddy” Evans, one of five African American men who walked through the doors of the “whites only” Alexandria Library in what many believe to be the earliest protest of the Civil Rights era.

“My granddaddy never talked about it,” Evans-Reed said at an Aug. 19 reception commemorating the 80th anniversary of the Alexandria Library Sit-In. “He only mentioned it once when I was about 10. It wasn’t until I saw a photo in the newspaper a few years ago and thought ‘What’s my brother doing with a police officer?’ They look identical but it was then that my mother explained the significance of what he had done.”

Evans-Reed and her sister, Sonya Patrice Evans, were joined at the reception by four generations of the Evans family at the Barrett Branch library on Queen Street, the site of the 1939 protest that saw her grandfather and four others arrested for entering the “whites only” building.

“I’m here to celebrate the big, big thing that my granddaddy did by walking into this library,” Evans-Reed said. “William ‘Buddy’ Evans set the tone for our entire family to do great things.”

Originally called the Alexandria Library, the present-day Barrett Branch Library was built in 1937 to serve the city’s white residents. African American residents were denied access even though their tax dollars helped finance the library, forcing those interested in reading to travel to Richmond or Washington, D.C., to use libraries there.

Evans was 19 years old when he agreed to participate in the peaceful protest orchestrated by Samuel W. Tucker, a young attorney who was determined to establish equal access to community resources. Evans was joined by Tucker’s younger brother Otto, 22; Edward Gaddis, 21; Morris L. Murray, 22; and Clarence "Buck" Strange, 21. One by one, each entered the library and requested a library card. When they were refused, they selected a book and sat down to read in silence.

A few blocks away, Tucker waited in his law office for word on the protest. When a panicked library clerk called the police, Tucker called the media, and by the time the five men were escorted out of the building, a crowd of more than 300 had gathered outside.

Evans and the others were arrested and charged with disorderly conduct, even though witnesses testified the men were quiet and orderly during their time in the library. Tucker defended the men at trial and the charges were dropped after the arresting officer admitted the men had been arrested for their race and not their behavior.

Tucker used the protest to file a lawsuit to end the exclusion of African Americans from the public library. While a final ruling was never entered in the case, the judge found that no regulation limited the library's use to whites; it was open to Alexandria residents or taxpayers.

Despite the ruling, rather than allow black readers into the library, City Council appropriated funds to build a "colored branch" of the library, which opened in 1940 at the corner of Wythe and North Alfred streets. Named for a freed slave and beloved Alexandria pastor, the Robert H. Robinson Library was constructed at half the cost of the Alexandria Library, had shorter hours and was filled with secondhand books.

When invited to apply for a library card at the Robinson Library, Tucker refused to settle for the city’s “separate but equal” solution, saying, “I refuse and will always refuse to accept a card to be used at the library to be constructed and operated at Alfred and Wythe Streets in lieu of [a] card to be used at the existing library on Queen Street for which I have made application."

It wasn’t until the 1950s that Alexandria’s libraries were finally integrated. The Robinson Library closed in 1962, and today is the home of the Alexandria Black History Museum. The groundbreaking sit-in is chronicled in a documentary called “Out of Obscurity,” which was shown following the commemoration ceremony.

“I had no idea about any of this until five or six years ago,” said Sonya Patrice Evans. “My grandfather was so laid back and it was all about us when we were with him. He really never spoke of it. But I am so very, very proud of him.”