Medal of Merit for Life-saving Action 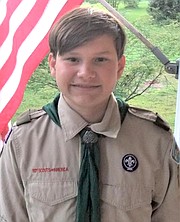 Calvin Mihalak, a member of Scouts BSA Troop 1983 at Vale United Methodist Church in Oakton, was awarded the Medal of Merit by the Boy Scouts of America for extraordinary skill in saving the life of a drowning individual on Aug. 8, 2019. When Calvin saw his father remove an unresponsive young boy from the pool, he quickly jumped to action. Using skills that he had recently learned as part of the Lifesaving merit badge at summer camp, Calvin began administering CPR, and after a number of CPR cycles, the young boy began taking limited breaths. When the ambulance arrived, the EMTs took over, and by the time the young boy was in the ambulance for transport to the hospital he was breathing regularly. As a result of Calvin’s quick action, extraordinary skill, and calm demeanor he saved the life of an individual who has since fully recovered.