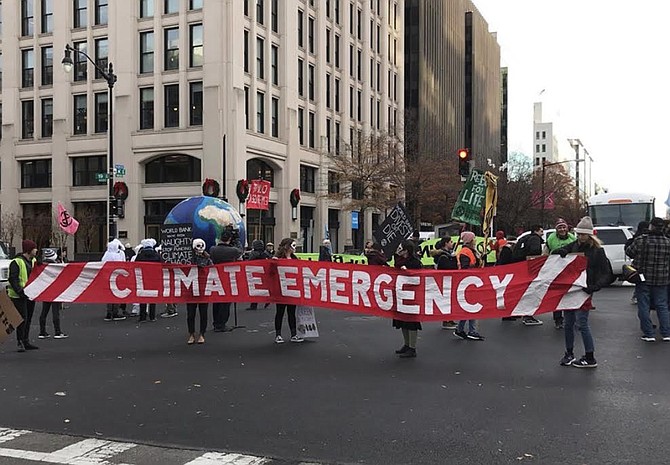 Strikers on the streets of D.C. Photo contributed

Strikers walking by the Capitol Hill, including Annabelle Dennen and Cate Coetzee, both 14, of Great Falls.

Outside of the Library of Congress, strikers and a golden retriever sit in playing protest music. Their colorful signs read “School Strike For Climate” and “Fridays For Future.” It is a scene that repeats itself every Friday. The group was of many ages and were from Maryland, D.C., and some from our Great Falls community. Some have come after a day in school, some have skipped school to be present.

They are striking, as they do every Friday, with the D.C. branch of Fridays For Future, an international organization founded by Greta Thunberg. They are there to demand action on the climate crisis as demanded by science, and they have vowed to come back every Friday until they see it.

It is a cold December day, but that doesn’t deter them. As the light fades over Washington, two strikers take their shoes off and dance on the sidewalk to Billy Joel’s “We Didn’t Start The Fire.”