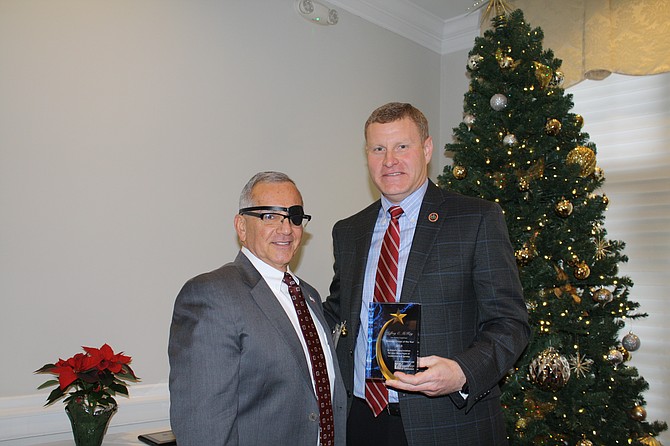 In the middle of the Mount Vernon-Lee Chamber Awards, all the speeches and awards pictures stopped for the impromptu ugly holiday sweater, 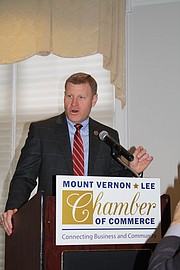 competition, which gave way to a few jokes and chuckles amongst the tightly knit group. That’s the spirit that makes the chamber what it is, embracing and supporting the companies in Mount Vernon and the surrounding area.

After the sweater winner, who was judged by the applause level, all eyes turned to Supervisor Jeff McKay (D-Lee) who was named the Chamber Citizen of the Year.

McKay is actually the outgoing supervisor, and was recently elected as the Chairman of the Board of Supervisors, where he’ll take the reins in January after being sworn in on Monday, Dec. 16. He didn’t forget his life in Lee District where he grew up and worked for years, promising lots for the south county area.

“Great things coming to south county in the next four years,” McKay said at the podium. “We’re going to invest $1 billion for Embark, I guarantee you that’s going to happen,” he said.

McKay’s award capped off the chamber’s “Best in Business Excellence,” awards where companies and people all over the Lee-Mount Vernon area were recognized for achievements. The rising star award was given to two people this year; Dr. Joseph Stoltz of George Washington’s Mount Vernon, and Travis Clarke. Mark Murray was named the new chamber president for 2020; Links 2 Freedom was named the non-profit of the year; Harmony Animal Hospital was named the new business of the year and the best of excellence award was Links 2 Freedom.

The 2019 chamber president Stan Koussis started out the event noting that Virginia is ranked as the best state for doing business, up from their ranking of eighth in 2014. “That is because of all the work that is done throughout the state,” he said. “As business leaders and managers, we’re part of a larger ecosystem,” he added.

Supervisor McKay noted the achievements that were implemented in Lee District to “help promote and build our community,” including the work at Huntley Meadows Park, putting in Jeff Todd Way and attracting the Transportation Security Administration, coming to a new building near the Franconia-Springfield Metro Station. McKay was accompanied by his wife and parents.

Supervisor Jeff McKay is the 2019 Chamber Citizen of the Year. Jeff has been a Chamber member since he was elected as Lee District Supervisor. He has been a great friend and

supporter to the business community. Recognize Jeff as he becomes chairman of the

﻿Fairfax County Board of Supervisors.

Springfield Town Center is Large Business of the Year

Springfield Town Center is the centerpiece of Lee District revitalization and one of the most valuable properties in Fairfax County. It is a regional shopping destination and home to stores, restaurants, and entertainment.