‘What It Means to Serve One’s Neighbors’ in Fairfax
Votes

‘What It Means to Serve One’s Neighbors’ in Fairfax 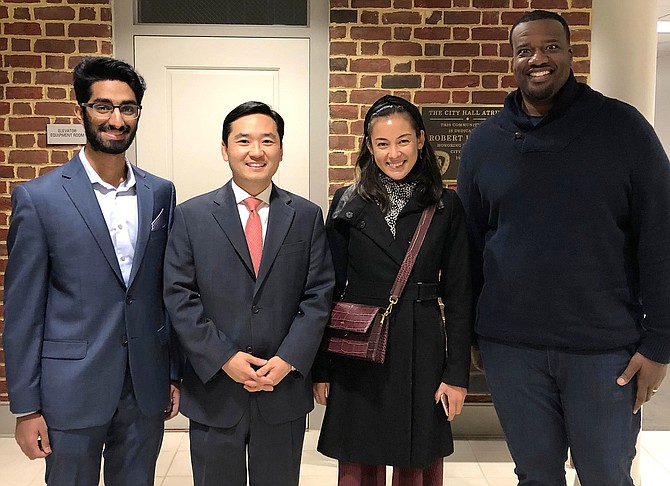 Since Sang Yi works for the federal government, he’s professionally prohibited from taking his $12,000 salary as a Fairfax City councilman. So, again this year, he’s donating it to three worthy organizations.

At the outset of the Nov. 12 City Council meeting, he said he ran for office because he wanted to help people, and this is another way he can do it. “What we like to do in this community is [recognize] organizations who help other people,” said Yi. “And we have three organizations that assist others in need and make our community better.”

Introducing an appropriations resolution for his salary, he said $7,500 would go to the Fair Lakes Youth Association, $2,500 to the Josh Anderson Foundation and $2,000 to Yellow Ribbons United. He said the Fair Lakes Youth Association is a band of Fairfax High students who want to start robotics programs at Daniels Run and Providence elementary schools.

“I want to make sure that the STEM activities they learn in the classroom are supported,” said Yi. “And I’m really proud of the high-school students stepping up to support their community this way.”

Regarding the Josh Anderson Foundation, he said, “The number two cause of death in U.S. teenagers is suicide, and I’m bothered by that – it’s a terrible statistic. So we need to make sure we have resources for our students to be able to find another way out. This group does a lot of great work with suicide awareness and prevention at Fairfax High School.”

As for Yellow Ribbons United, Yi said, “As a military member, myself, this organization is close to my heart because of what it does for military families.” Then representatives of each entity came to the podium and explained to the City Council members exactly what their groups do to help others.

FIRST was Aashray Manchanda, a junior at Fairfax High and captain of the school’s robotics team, Xtreme Voltage. Speaking as a member of the Fair Lakes Youth Association, he said his group is dedicated to supporting robotics-club initiatives throughout Fairfax County.

“This past year, we’ve established a robotics team of over 20 members at Fairfax High, which has been hugely successful,” he said. “We’ve also established a robotics team at Lanier Middle School with over 40 members,” continued Manchanda. “And they’ll be working together to design, build and program a robot to compete at a competition in the next few months. We’ve also been working to establish two LEGO robotics teams – the same concept, but at a lower scale – at Daniels Run and Providence elementary schools.”

These teams currently have 10-15 members each. And, working with their teachers, they’ll be able to learn more STEM-based skills to better prepare them for the future. Furthermore, said Manchanda, “This progression of programs across elementary, middle and high schools allows students to be able to begin robotics and STEM education early on, in the third or fourth grade, and continue it all the way through the 12th grade…and better our Fairfax City community of learners.”

Next came Lauren Anderson, executive director of the Josh Anderson Foundation, named after her brother who died by suicide in 2009 at age 17. Three years later, in 2012, the foundation was incorporated, she said, “to provide adolescents with mental-health education, resources and support so they never turn to suicide.”

In 2016, it launched its signature program, “Our Minds Matter,” a student-led club. “It provides a platform for students to come together at their high schools and do activities related to reducing stigma, increasing help-seeking skills and awareness of resources, and promoting positive coping skills,” explained Anderson. “These are all protective factors for positive mental health and preventing suicide.”

This club is already at Fairfax High, and the funding will enable it to continue there. Anderson noted that “we’re in 17 high schools across the county, and this is one of our most well-attended.”

LAST TO SPEAK was Derrick Dockery, co-founder of Yellow Ribbons United. “We truly appreciate this grant, as well – it’s our second year,” he said. “Because of your support, we are able to invite a lot of kids from Fort Belvoir to our holiday event, ‘Winter Wonderland,’ at the Ritz Carlton at Pentagon City.”

“I’m also a former NFL player – a 10-year veteran – for the Washington Redskins, Buffalo Bills and Dallas Cowboys,” he added. “So Yellow Ribbons United utilizes the platform of professional sports to engage and support military families – and children, in particular. My wife’s a military brat; her father, a retired colonel, served 30 years, and they lived all over the world.”

But tragically, said Dockery, “We lost my brother-in-law in 2012, and I remember vividly getting that phone call. So that spurred us into action, and we started Yellow Ribbons United. And because of your grant this year, we’ll serve 30 percent more children at Fort Belvoir at our holiday event. So we are very grateful and thankful for your support.”

Councilman Michael DeMarco then seconded Yi’s appropriations resolution and the Council unanimously approved it. Afterward, Yi said, “I’m extremely proud to support these three organizations dedicated to helping others. These community leaders really inspire me and remind us of what it means to serve one’s neighbors. I also appreciate my colleagues for voting with me to pass my appropriations resolution.”