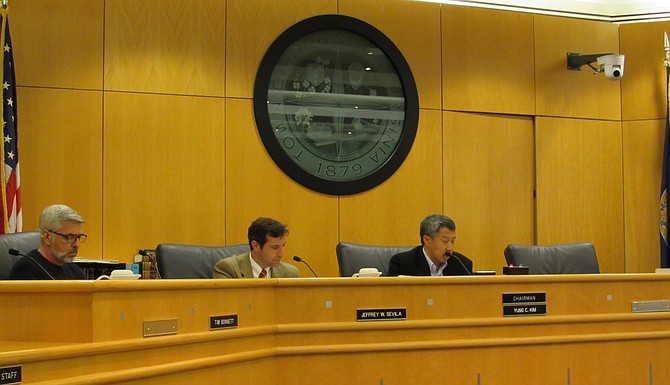 Three of the five Town appointed members of the Herndon Board of Zoning Appeals review their notes. Photo by Mercia Hobson.

On Jan. 24, 2019, the five town-appointed members of the Herndon Board of Zoning Appeals (BZA) met to review the Zoning Administrator's decision that concert events are not a permitted use for a property (759 Center Street). Owned by appellant Chris Devine, the residence is zoned for and built under the building code as a residential townhouse. Devine received a Notice of Violation ZE18-01517 for having musicians perform at his home.

Under sworn testimony, David Stromberg, Zoning Administrator, said that the most compatible use group for a concert venue in the current zoning ordinance is the "Indoor Entertainment use" group, an accessory use not named in the code for Devine's residential property. Stromberg defended the Notice of Violation.

"Based on activities observed and the supporting data obtained from the appellant's website that the use occurring on the property, (it) has more similarities with an Indoor Entertainment type use rather than a residential use or an accessory residential use," Stromberg said. He recommended affirming the violation. Stromberg said attendance was open to the public, "tickets" purchased online through the applicant's website, attendees provided money for a live music performance. The homeowner hosted 23 performance events in 2018, Stromberg said.

APPELLANT Devine in his Statement of Grounds for Appeal said that the activity in his private residence on the night of Nov. 17, 2018, was a house concert, not a commercial Indoor Entertainment event. Devine said he acted as a host for his guests and invited performers and created his website cribconcerts.com to assist with invitations, tracking and provide a convenient "virtual tip jar" for suggested donations for the artists, 100 percent of which he passed to them. Devine acknowledged that since he received the Notice of Violation, he changed items on his house concerts website so as not to confuse anyone.

Speaker Anders Thueson, of Merrifield, urged elected officials to write a new zoning code. "You can define what a house concert is for Herndon. …You have a moment to put that in your code; to make it a reality here in Herndon that can be used as an example for every other community in America," he said.

During board discussion though, Chairman Yung C. Kim directed the board only to consider the events of Nov. 17. He told the board members they do not have the authority to write zoning code. "Our decision is based on the snapshot of when the violation occurred; anything after…does not reflect on our decision. …We are just here to interpret and determine if the Zoning Administrator interpreted it (the code) correctly. …This board does not have any control over the language or authority to change the ordinance," said Kim.

Lesa J. Yeatts, Town Attorney, explained to the BZA the Code of Virginia gives Zoning Administrators of localities the authority to determine things that are not apparent. Yeatts added that the determinations by Zoning Administrators are presumed to be correct until an appellant rebuts such presumptions by a preponderance of the evidence.

AFTER MUCH BOARD DISCUSSION, multiple motions and withdrawing of motions, the Town of Herndon BZA in a vote of 3-2 reversed the Zoning Administrator's decision that house concerts are not a permitted use in the subject property and rendered Notice of Violation ZE18-01517 void "due to the ambiguity within the ordinance in identifying house concert as not being permitted.”