‘Raise the Bar for All Kids’ in Alexandria
Votes

‘Raise the Bar for All Kids’ in Alexandria 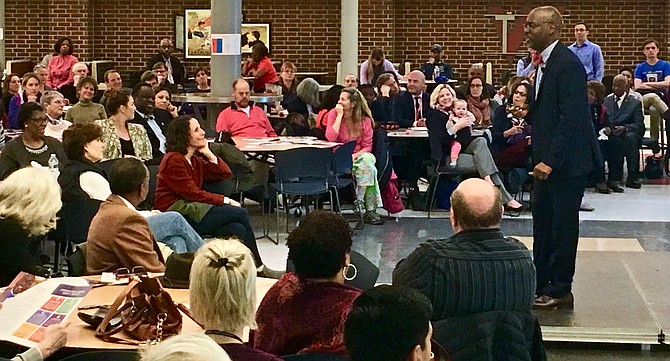 Having analyzed the situation over the first 100 days of his tenure, Superintendent Dr. Gregory Hutchings laid out his vision, principally for “equity,” for the public school system’s future.

“Equity is the number one reason why ACPS is not the number one school division in this state, in the country,” he told a crowd of parents, teachers and others in a packed T.C. Williams cafeteria last Wednesday, Feb. 6. “Every single discussion all revolved around inequities that we have in our schools — [which] sometimes we’re afraid to discuss, sometimes we don’t even know are there, it has become so normal,” he said.

Much of Hutchings’ vision builds from the book, “Building Equity: Policies and Practices to Empower All Learners,” by Dominique Smith, et al., which he’s distributed to staff and the School Board.

Smith and her co-authors describe the difference between equality and equity this way: “Equality is rooted in the concept of fairness, and a fair race is impossible when its various runners start at variable distances from the finish line, and the course takes them over very different terrains. Similarly, providing equal access to the stairway does not promote fairness to those who use wheelchairs. Achieving equity requires that this fact be acknowledged — and that we build a ramp alongside every stairway.”

A basic building block for equity is “physical integration,” meaning that, as much as possible, students of different gender, background, etc. mix together. This echoes a major theme from the school system’s recent audit on its policies and practices relating to students with disabilities.

“At least 85 percent of the [special education] students in this school district are [of] average to above-average intelligence,” said Terry Werner, the schools’ director of specialized education. Some might need a little more personalized attention, but overall they should face the same challenging material as non-disabled students in regular classroom settings.

Hutchings would apply this principle broadly, in terms of both student composition and academic rigor. He proposes conducting an “equity audit” of each school in the division.

“This is a topic that everybody gets nervous about, that we don’t want to talk about, but we do have some modern-day … segregation in our classes,” he said last Wednesday. “You should not be able to walk into a classroom and know this is a ‘low-performing’ class, or this is an ‘honors’ class. … If kids have never been exposed to rigor before they walk into T.C. Williams’ doors, they are probably not going to be successful in an A.P. [Advanced Placement] or honors course, period. So we have set them up for failure and we have caused the problem of not having children of color in some of these classes.”

He believes many students do not face sufficient rigor as part of their core curriculum, and that this constitutes a deep, systemic failing in the school division at present.

“We have very low expectations in some of our general education classes,” especially in middle school, he said in a subsequent interview. For example, “right now, only honors students are required to do a science [fair] project. … That should not be optional. … The science project may not the same caliber for every student, but every student should understand the concept of it and know how to do a project. … When I saw it, I was appalled. … We shouldn’t say, oh, they’re ‘general ed,’ they can’t handle that. Raise the bar for all kids, give them the necessary supports, and we will see them achieve.”

School Board member Margaret Lorber says she agrees with Hutchings’ take on the “equal-equity dichotomy.” She doesn’t necessarily think students should be graded against different yardsticks, but she agrees that coursework should in some measure account for students’ different individual situations. For example, in evaluating a science project, one should weigh whether a student’s parent is a physicist or works three jobs and doesn’t have much time to help, she said.

“I agree that our school division needs to prioritize equity. We need to end segregation in our schools and provide all students with access to a challenging curriculum,” said School Board member Michelle Rief.

Asked if, in addition to his characteristically positive and affirming leadership style, he intends to turn the screws on division staff and educators, he said: “Absolutely. … Don’t let the warm-and-fuzzy fool you.” He plans to set higher expectations for teachers, but also provide them the professional supports to achieve.

Hutchings believes concerns about equity pertain not just to students, but also to parents and families.

“Our under-served and our under-represented families … feel that they do not have open access. They sometimes don’t feel that the PTA is the place that they want to go,” he said. “What I heard was that, because the PTA traditionally has been our more affluent families, educated families, in most cases our white population, that some [non-white and immigrant] families … just don’t feel they have anything in common.”

He affirmed the PTA Council’s nascent efforts “to bring meetings to the community,” such as perhaps expanding the practice of conducting meetings at differing settings and times of the day.

Lorber agrees that equitability in parents’ access to the administration is a persistent challenge. Inasmuch as the barriers are logistical rather than social, she thinks the school system has improved in recent years. For example, the division now provides translation services and publishes major announcements and resources in English, Spanish, Amharic (Ethiopian), and Arabic. Lorber also applauded outreach efforts of the schools’ Family and Community Engagement (FACE) program.