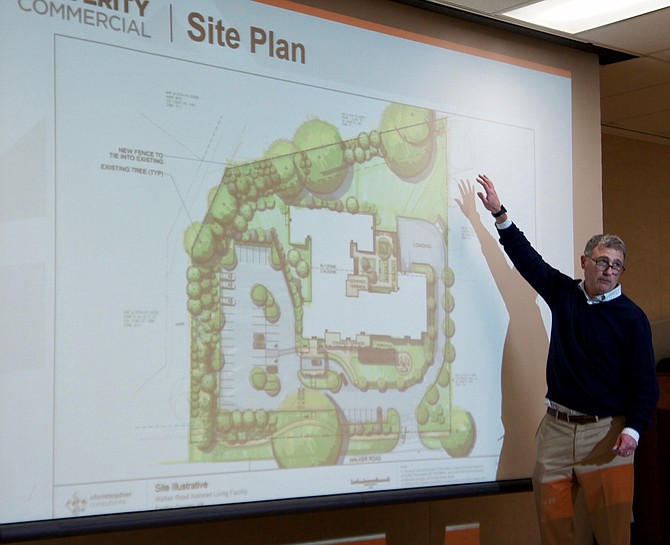 Herman Diebler, principal of development, design and construction firm Verity Commercial of Reston, explains the boundaries and specifics of the proposed Residences at Colvin Run Assisted Living Community that he and partners hope to build on Walker Road in Great Falls. Photo by Andrea Worker. 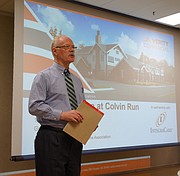 Bill Canis, president of the Great Falls Citizens Association, welcomes the attendees to the meeting, hosted by the group “to keep residents in the loop and allow them a voice.”

On Tuesday, Feb. 12, the Great Falls Citizens Association (GFCA) hosted a meeting for area residents to review the revised plans for an assisted living community that developers hope to see approved in the coming months.

The meeting was kicked off by comments from GFCA president Bill Canis and Fairfax County Supervisor John Foust (D-Dranesville). Foust expressed support for the project, saying he was pleased “we are at the point of taking this to a Planning Commission Hearing” later this month.

A lot of the pre-construction work is already behind them, but Herman Diebler, principal of developer Verity Commercial told the gathering that their application was still pending and there was plenty of time yet for modifications as requested by the County or after further consultation with Great Falls residents and the design consultants.

Even the the 2.8-acre parcel, located off Walker Road near the intersection of Colvin Run, is not in their control at this time, still owned by long-time Great Falls residents, the Foley family of W. M. Foley Construction Corporation. The property is mostly zoned for commercial use, and the Foleys had already prepared designs for a retail project on the site.

OVER THE LAST 14 MONTHS, Diebler, and a team of architects, civil engineers, land use attorneys, landscaping experts, as well as CEO Rick Irwin of partner company IntegraCare that would operate the facility, have been meeting with Great Falls citizens and various organizations “to make sure we fit in, address the needs and concerns of the community, and to learn about the area before making even the first move.”

Verity Commercial is based in Reston, and Diebler said that he and the company were “neighbors of Great Falls” and sensitive to “doing things the right way” to maintain its character and protect the look, feel, and environment of the area.

“Ultimately, the outcome will be my responsibility,” he stated.

“We’ve been talking – and listening – to everyone involved or interested in, or potentially affected by” the proposed 62-unit “Residences at Colvin Run” complex that would have separate sections for assisted living and memory care residents.

As Bill Canis averred, Verity and group have met not only with the owners of residential property that would border the facility, but also with the GFCA, the Great Falls Historical Society, the Garden Club, the Great Falls Senior Center, and neighboring businesses, “and continue to do so.”

William “Buzz” Drury with Architecture Incorporated of Reston explained the differences between the previous plans and the modified version. In this new iteration, The Residences at Colvin Run would now include more green spaces. Additional “green screening” was now possible between the complex and its neighbors.

The entry portico was moved to allow better access for emergency vehicles and better parking facilities. The main entrance was realigned to face the entrance to the retail center across Walker Road for safety purposes.

Stormwater treatment changes were also made, moving to an underground system, versus a dry pond method above ground that posed numerous challenges and may have affected the neighboring residential property. This adjustment also protected more of the large trees on the property – a change that met with comments of approval from several attending residents.

In the revised plan, sidewalks would be extended to improve pedestrian access along Walker Road to the retail businesses and restaurants like Mookies BBQ.

There were a few comments and suggestions from attendees, mostly about landscaping, lighting and hopes that more could be done to improve general safety at the intersection of Walker and Colvin Run Roads, but no opposition was expressed concerning the proposed development.

DIEBLER AND PARTNERS have high hopes for a start on the project in the near future.