FCDOT reaches out to the community. 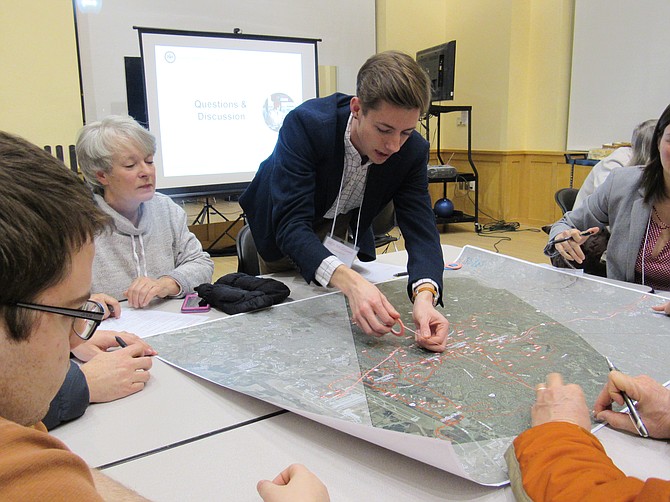 The Fairfax County Department of Transportation (FCDOT) held an interactive community meeting in Herndon led by Michael Felschow, Planning Section Chief, Transit Services Division at Fairfax County - Fairfax Connector. Felschow provided information about the proposed Connector route changes and reached out to the public for their input toward better local bus service in the Herndon-Reston area. The meeting was part of a process to generate service improvement recommendations and an implementation plan for proposed service changes.

The public sat at tables seating 8 or so people. On the tables rested large maps showing existing bus routes. Staff from Foursquare ITP, Jessica Alvarez and Jack McDowell focused on drawing out information from attendees. "Where should the bus routes go and when,” they asked. As citizens took turns, Alvarez and McDowell pulled out thin line adhesive tapes and adhered them to the maps to mark citizen input. Later, the citizen-data would be combined to help formulate a new proposed transit plan.

For more information about the process, Felschow asked that the public visit fairfaxconnector.com.