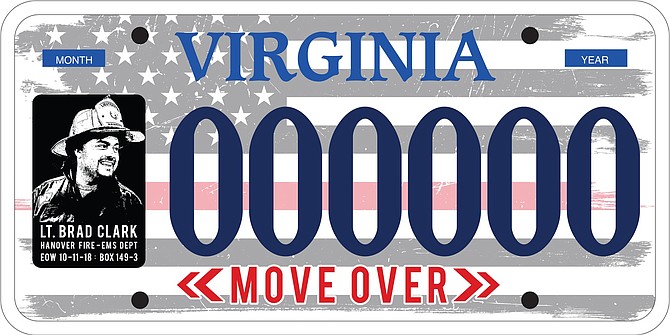 In October, Lt. Bradford Clark, a Hanover County firefighter, was killed when a tractor-trailer failed to “move over” as mandated by Virginia law. Now, the General Assembly plans to memorialize Clark through a specialty license plate and strengthen the state’s “move over” law.

As Tropical Storm Michael pummeled Virginia, Clark responded to an accident in the left lane and shoulder of Interstate 295. A tractor-trailer crashed into his fire truck, killing him.

“Public safety officers have repeatedly expressed their concerns to me of dying in the same manner my husband did,” Clark’s widow, Melanie Clark, told lawmakers as she testified in favor of legislation to strengthen the “move over” law.

“They fear they will not come home to their families because of the increased life-threatening dangers that exist while working on highways and byways.”

Enacted in 2002, the “move over” law requires motorists to change lanes for stationary vehicles with flashing emergency lights, including police, firefighters, tow trucks and Virginia Department of Transportation crews. A first offense is a traffic infraction with a fine of up to $250, and a second offense is a Class 1 misdemeanor punishable by up to a year in jail and a $2,500 fine.

Del. Chris Peace, R-Mechanicsville, said accidents caused by drivers who fail to move over have increased recently. Speaking before the House Courts of Justice Committee, he cited a day in December, during a snowstorm, when four state troopers were rear-ended in a 24-hour period.

In honor of Clark’s memory, Peace is sponsoring HB 1911, which would strengthen the current law and make the first offense a Class 1 misdemeanor rather than a simple traffic infraction. The bill passed committee Monday and is on track to be approved by the full Senate before the end of the 2019 session.

Clark called her husband’s death entirely “avoidable” and “untimely.” She said her husband was aware of the danger and gave his life to warn the other three firefighters on the scene.

“With little time and a tractor-trailer barreling down on them, Brad warned his crew of the oncoming danger,” she said. “His actions saved their lives and cost him his own.”

To further honor Clark’s legacy and bring attention to his death, the Senate passed a bill Monday designating a new specialty license plate inscribed “Move Over” and bearing a picture of Clark. That legislation, HB 2011, also was sponsored by Peace.

“Brad was a dedicated public servant and family man,” the Clark family wrote in a statement shortly after his death. “We delight in the joyous years we spent with Brad and the time we had to know the hero that he was, long before he laid down his life so that others may live.”

Most of the plate’s annual $25 fee will go to the Fredericks Family Fund Foundation, which has pledged to use the money to “honor and help take care of” Clark’s widow and four daughters, according to organizers.

By Jan. 31, 515 paid registrations were collected, surpassing the 450 needed for the initial legislative vote and to print the plates. For the foundation to financially benefit, at least 1,000 registrations are needed.