’Man of La Mancha’ in Lorton 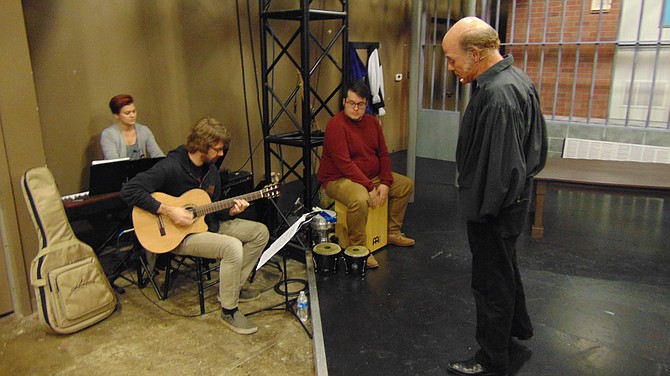 John Hollinger, who plays Cervantes in “Man of La Mancha,” rehearses a song with the band. Photo by Steve Hibbard.

With a cast of 12, the Workhouse Arts Center in Lorton is presenting “Man of La Mancha,” the classic tale of hope, from now through Jan. 13, 2019. Inspired by Miguel de Cervantes’ 17th-century masterpiece “Don Quixote,” the play celebrates the perseverance of a dying old man who refuses to relinquish his ideals or his passion. A musical with 20-some songs, the score includes “The Impossible Dream,” which found its own life after the production, having been recorded by many major popular vocalists. The show is directed and choreographed by Jeff Davis and Mary Payne, with musical direction by Merissa Driscoll.

Miguel de Cervantes, aging and an utter failure in his varied careers as playwright, poet and tax collector, sits in a Seville, Spain dungeon with his manservant, awaiting trial by the Spanish Inquisition for an offense against the Church.

THE OTHER PRISONERS set up a mock trial: if Cervantes is found guilty, he will hand over all his possessions. Cervantes agrees to do so, and offers his defense in the form of a play, and in doing so the classic tales of adventure of the errant and noble knight Don Quixote unfold.

Mary Payne, 53, of Manassas is playing the role of Aldonza, one of the three main characters. “Aldonza starts out as a prisoner and Cervantes comes in and starts putting a show together and uses the prisoners,” she said. “He uses Aldonza as the serving maid in this Inn and then he is playing a character that is a little bit touched in the head, and he sees her as Dulcinea, his beautiful lady. She’s actually dirty with ripped up clothes but in his mind she’s a beautiful lady – the damsel in distress. So, throughout the show she’s trying to understand why he sees her this way and he ends up pulling her in and she revels in the whole thing.”

Payne said the role is very challenging to play vocally. “The range is a very low belt to a high soprano. It plays the gamut during the whole show. It’s also very emotional in that there’s an abduction but she’s basically gang-raped and it’s challenging emotionally,” she said.

For audience takeaways, she said: “I would hope that (audiences) would take away the fact that there’s always hope no matter what you’re going through. You have to see the good and look for the positive and move toward that.”

John Hollinger, 63, of Fredericksburg, plays role of Cervantes. “He is the poet who is thrown in jail and the other prisoners put him on trial. In order to defend himself, he puts on the show to prove that he’s a playwright and to demonstrate man’s better nature,” he said. “It’s about a guy putting on a play set in a prison.”

He added: “Here we have this great location (the former Lorton Prison) that lends itself perfectly to this show. This is also a big show. It’s very nice that it’s presented in this intimate style.”

AS FAR AS CHALLENGES, he said: “It’s a large role in terms of dialogue. But we had a good, long rehearsal process and it’s a big role, and I was able to rehearse a lot and ease my way into it. I’ve just had a real good time. It’s a beautiful show. These young folks have worked so hard. They bring a lot of effort to the show. It’s a very rewarding experience.”

For audience takeaways, he said: “I guess most of all I hope that they enjoy it and are entertained by it and moved by the profound humanity of the whole thing. I think we bring it across very well. It’s a big show. It encompasses the whole heart – the human condition. They can take away many things, but I hope they enjoy it.”

The Workhouse Arts Center, now in its third season of producing plays, is presenting “Man of La Mancha” from now through Jan. 13, 2019. Tickets are $20-$35. Show times are Fridays and Saturdays at 8 p.m.; Sundays at 2 p.m. Limited seating, advance ticket reservations are recommended for this event. Reserved tickets may be collected at Will Call beginning 30 minutes prior to event; doors open for seating 30 minutes prior. The venue is located at Workhouse Arts Center, 9518 Workhouse Way, Building W-3, Lorton. Visit the website:www.workhousearts.org.