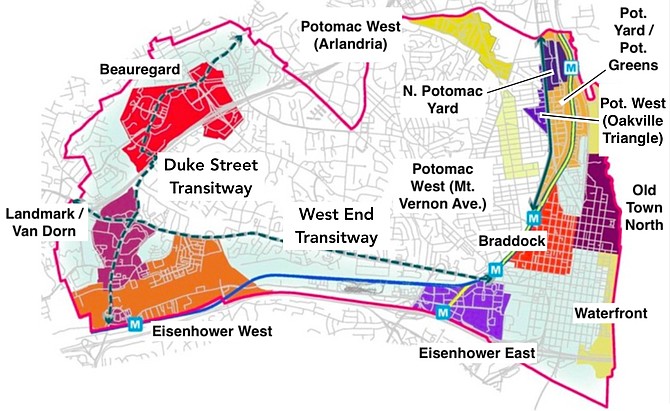 City government planning efforts over coming years — including in relation to Amazon and Virginia Tech coming to National Landing — focus on neighborhoods in the "Growth Crescent."

“The affordability challenges we have in this city are among our greatest, and if we have the option to be exploring new tools to address that, … we would really want to.” —Planning Commissioner Stephen Koenig

City staff are soliciting feedback this month from the Planning Commission and City Council on a long-range planning program, which will inform the city manager’s FY 2020 budget proposal.

Every year the city’s department of planning and zoning puts forward the Interdepartmental Long-Range Planning Work Program, which prioritizes city planning efforts, especially as they relate to land use. The FY 2020 draft describes and sequences 69 projects, plans, studies and policy initiatives through FY 2021. These items cross departmental boundaries — especially between planning and zoning, transportation and environmental services, parks and recreation and housing.

“This is probably one of the most important items we hear all year, because it really does specify where the priorities are going to be in terms of placing an emphasis on planning activities,” said Nathan Macek, the Planning Commission’s vice chair, at their meeting on Thursday, Jan. 3.

Certain efforts would require new funding — $800,000 in total — in what the draft cautions is “a very fiscally challenging budget environment.” It’s too early to predict which initiatives would likely make the FY 2020 budget cut, according to planning and zoning’s Karl Moritz. City Manager Mark Jinks is reviewing all city departments’ budget submissions. The Planning Commission’s and council’s input this month on the draft long-range program will inform Jinks’ prioritization in his forthcoming budget proposal, said Moritz.

Discussion at last Thursday’s Planning Commission meeting touched repeatedly on the issue of housing affordability. Related feasibility studies in the FY 2020 draft are among those that would require new money.

“There is a lot of interest in whether or not there is a constrained supply of approvable, buildable housing units in the region, compared to the number of jobs that are expected. The planning directors and housing directors throughout the region are studying that right now through the Council of Governments,” a regional body, said Moritz.

The metropolitan area must add 690,000 housing units — 115,000 over what’s currently assumed — by 2040 to accommodate workers for forecasted new jobs, according to Council of Government figures release last fall. For its part, Alexandria would have to add some 35,000 new units — around 50 percent more than its current supply.

While housing supply for jobs “is a distinctly different question than the supply of housing affordability” specifically, “supply constraints can drive up the cost, and that’s a negative,” said Moritz.

“The affordability challenges we have in this city are among our greatest, and if we have the option to be exploring new tools to address that, … we would really want to,” said Planning Commissioner Stephen Koenig.

“I’m particularly concerned about Arlandria,” said outgoing Planning Commission Chair Mary Lyman. “Now that it has Amazon looming over it, that concern is increased. It has been a nice little nest of affordable housing in the city. … It also adds to the city’s diversity. It’s got a real bit of ethnic flavor to it that you don’t find in other parts of the city, and I think it would be a shame if it got overdeveloped and gentrified.”

City Council will discuss the draft long-range program at a retreat tentatively scheduled for Saturday, Jan. 26. Council will consider the final work program for approval in May. Find more at www.alexandriava.gov/Planning.