Where State and City Intersect in Alexandria
Votes

Where State and City Intersect in Alexandria 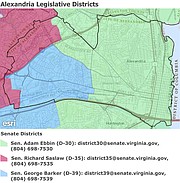 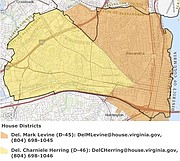 Alexandria’s state delegation and City Council are pushing legislation for school investment, voting reform, and gun restrictions, among other initiatives, at the state’s 2019 General Assembly, which convened this week.

The General Assembly kicked off on Wednesday, Jan 9 and will conclude on Saturday, Feb. 23. Legislators will decide on Gov. Ralph Northam’s (D) proposed amendments to the FY 2019-2020 biennial budget. Northam’s proposed adjustments include numerous that are “of interest” to Alexandria, according to a memo from City Manager Mark Jinks. For instance: $25 million in state bonds for Alexandria’s sewer upgrades; a 2 percent pay bump for public school teachers; about $160 million for various education investments; $19 million in one-time money to the state’s Housing Trust Fund.

The assembly will also decide on some 500 bills and resolutions submitted so far by state senators and house delegates. The three senators and two delegates whose districts include parts of Alexandria have together so far introduced 44 bills or resolutions, and have signed onto many others as well. For instance:

City Council also weighs in, especially through Sarah Taylor, the city government’s legislative director. Taylor engages state legislators, staff and committees throughout the year, especially during the General Assembly, to support or oppose legislation in accordance with council’s interests. Council articulated those interests in its 2019 Legislative Package, adopted in November, and subsequently in positions on 79 specific bills, approved on Tuesday, Jan. 8.

Council is keeping its eye on several initiatives related to school construction and modernization, though hasn’t yet endorsed any. In addition to the governor’s proposed budget amendments, options include a subcommittee’s proposal, spearheaded by Sen. Bill Stanley’s (R-20), to use Internet sales tax revenue to back bonds for schools; and legislation introduced by Del. James Edmunds (R-60) that would allow additional local sales and use tax for schools.

Here’s a sampling of legislation that council supports:

Here’s a sampling of legislation that council opposes:

Learn more at virginiageneralassembly.gov; watch video of House and Senate floor and committee proceedings by following the “Members and Session” link to the left. Track bills through Virginia’s Legislative Information System, lis.virginia.gov.