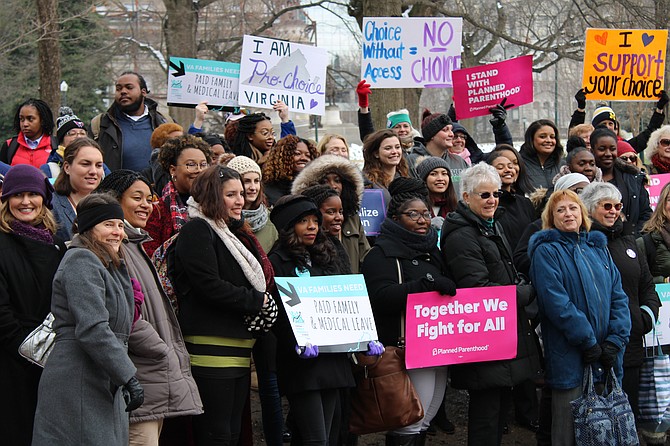 Organizations at rally included Progress Virginia and the Campaign for a Family-Friendly Economy. Photo by Georgia Geen

After dozens of women rallied at the Capitol on Monday, Jan. 14, a legislative committee passed one of their key priorities — a bill to raise the minimum wage to $15 an hour in Virginia.

Currently, the minimum wage in Virginia is the federal minimum — $7.25 an hour. Raising the minimum wage was one of a number of legislative items — including access to reproductive health and paid family and medical leave — supported by the women’s advocacy groups at the rally.

Tara Gibson, Virginia director of the Campaign for a Family Friendly Economy, said at the rally that raising the minimum wage would benefit women and their families.

“How many of you work multiple jobs just to provide for your families, or worry whether you can afford to put food on the table or make next month’s rent?” Gibson asked. “We’re all better off when everyone has the tools to build a good life.”

To Anna Scholl, executive director of Progress Virginia — one of the groups present at the rally — supporting an increase in the minimum wage contributes to a “holistic” approach to gender equality.

“We know all of those things are important for women and families to thrive,” Scholl said.

Gov. Ralph Northam spoke briefly at the rally in favor of paid medical and family leave. SB 1639 would allow state employees 12 weeks of family and medical leave per year. The benefit amounts to 70 percent of the employee’s wage, capped at $850 per week. Last year, a bill passed in Virginia granting state employees two months of parental leave.

“We want to make sure all Virginians have access to parental leave,” Northam said. “There is nothing more important than for a mother and father to be able to stay home with their new baby, or if there is an adoption or a foster child involved.”

Advocates also supported two bills that would prevent insurance companies from discriminating based on gender identity or transgender status. SB 1287 and HB 1864 are awaiting a vote at the legislative committee level.

Rebecca Barwick, a transgender woman who attended the rally, said the bills would help her get both prostate care and breast care. Currently, she said, her gender is listed as male on her insurance because if it were changed, she might be denied prostate care if she needed it in the future.

“However, having this marker set to male puts me at risk of being denied breast health if I ever need that,” Barwick said.

“This changed my travel for health care from three hours to 10 minutes,” Barwick said.