‘Joy, and a Message of Love and Acceptance’ in Fairfax
Votes

‘Joy, and a Message of Love and Acceptance’ in Fairfax

Chantilly teacher Andy Shaw acting in ‘Beauty and The Beast.’ 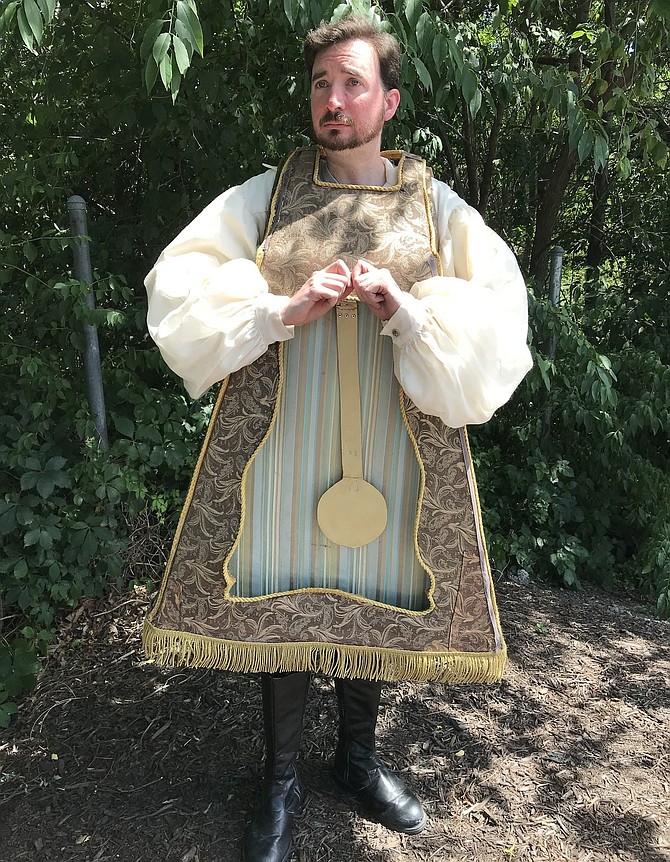 Andy Shaw portrays Cogsworth in the upcoming “Beauty and the Beast.” Photo Courtesy of Lori Crockett

When an old woman offers an arrogant prince a rose in exchange for shelter from a storm, he turns her away. She then turns him into a beast until he can learn to love and be loved in return. She also transforms his staff into inanimate objects. But when a woman named Belle trades places with her father, whom he’s captured, and starts living in his castle, love begins to bloom.

That’s the premise of City of Fairfax Theatre Co.’s production of Disney’s “Beauty and the Beast.” It’ll be presented July 19-27 at Lanier Middle School (see To Go box) and is CFTC’s 10th anniversary summer production. And performing in one of the main roles is Chantilly High Theater Director Andy Shaw.

“This show brings so much joy to young people, and we get to bring its message of love and acceptance to the audience,” said Director Amanda Herman. “The play teaches that you shouldn't judge someone based on what they look like, and that being different is a good thing – something we all need reminding of these days.

“I’m also excited to work with our largest cast ever – more than 45 actors of all ages – and even several parents acting with their children,” she continued. “There’s a great mix of CFTC veterans and newcomers, and we can’t wait to present this musical to area families. The set will look like pages of a storybook being opened, and special effects will include smoke and mirrors during the characters’ transformations.”

Delighted to be part of this play, he said he’s wanted to perform in “Beauty and the Beast” since it opened in 1992. “It’s probably my favorite movie and, once I saw it, I wanted to be in it,” said Shaw. “It’s a lot of fun, and I love the old-school, comedy-duo feeling between Cogsworth and Lumière, with physical comedy and verbal sparring. And I can have fun being a cartoon character on stage.”

His favorite number is “Human Again,” sung by all the enchanted characters. “They’re thinking about all the things they’ll do when the spell is lifted and they’re back to their old selves,” he said. “And it’s a really entertaining song,”

It’s his first show with CFTC, and Shaw is enjoying the experience. “The whole group is so talented and welcoming,” he said. “The enchanted characters are all having a blast in our scenes together, and I've loved being able to watch them work on the big numbers like ‘Gaston’ and ‘Belle.’ They look and sound fantastic.”

So, he believes audiences will have a great time. “It’s a classic story with a ton of heart and a ton of humor,” said Shaw. “People will fall in love with these characters all over again.”

Performances will be at Lanier Middle School, 3801 Jermantown Road in Fairfax. Showtimes are:

Pre-sale tickets are $20, adults; $15, children or students, via http://fairfaxcitytheatre.org. Discounted tickets are available for groups of 15 or more.

Subject to availability, tickets at the door will be $25, adults; $20, children or students. A sensory-friendly performance will be offered Wednesday, July 24, at 6:30 p.m. Tickets are $10 at the door only.