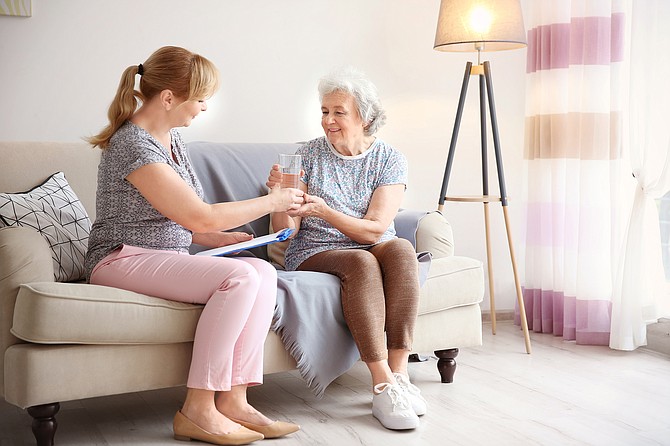 Drinking plenty of non-alcoholic fluids like water, even if you’re not thirsty, can help prevent heat-related illnesses.

With the sunny days of mid-summer come sweltering heat. This week’s heat indexes topping 110 degrees in some cases illustrate that July and August are the hottest months of the year, according to the National Centers for Environmental Information.

Soaring temperatures may have the greatest impact on those who are over the age of 65.

“They are more likely to have a chronic medical condition that changes the normal body's responses to heat,” said Amy Vennett, BSN, RN, Program Manager and Nursing Case Management for Arlington County. “Older adults don’t adjust as well as young people to sudden changes in temperature. They’re more likely to take prescription medicines that affect the body’s ability to control its temperature or sweat.”

The physical, cognitive and social changes that happen as one ages, make one more susceptible to illnesses related to extreme heat, says Ingrid Parkhurst, Center Nurse Coordinator and Gerontologist for the Fairfax County Health Department. “So, when it comes to the heat, we need to think about all three perspectives. Physically, older adults might overheat, sunburn and dehydrate more easily given changes to their bodies. Cognitively, older people are more likely than the general population to suffer from some mental decline, [and] they may not be able to communicate their needs in the heat as readily, leaving them open to dehydration and heat-related illnesses.”

Vennett says that the signs that might signal the onset of such an illness include “Heat stroke, heat exhaustion, heat cramps, sunburn, and heat rash.”

Local counties offer help during times of extreme heat, says Brian Roberts of the Montgomery Health and Human Services Department. “Anyone who needs to get out of the heat can take advantage of the cooling centers like senior centers during normal business hours.”

Staying indoors during the hottest parts of the day, is the most obvious way to prevent illnesses, says Vennett. “If you do spend time outside, wear light-weight, loose-fitting clothing. Drink plenty of non-alcoholic fluids like water, even if you’re not thirsty.”

“Stay ahead of your thirst,” continued Vennett. “On days with heat advisories, take sips from a water bottle all day. If you feel sick, see your physician. Older adults can have multiple health problems at once, and dehydration can affect any of these.”

Some older adults go through social changes that could leave them isolated and unable to seek help before reaching the point of an extreme heat-induced illness, says Parkhurst. “That is dangerous because if they do not have social connections it will be harder for them to access the care they need, especially in an emergency,” she said. “Those who are isolated or lack the physical ability to drink adequate amounts of water or recognize thirst are at greater risk. And, dehydration easily leads to urinary tract infections in older adults.”