Sailing lessons plant the boating seed for many youngsters in Mount Vernon. 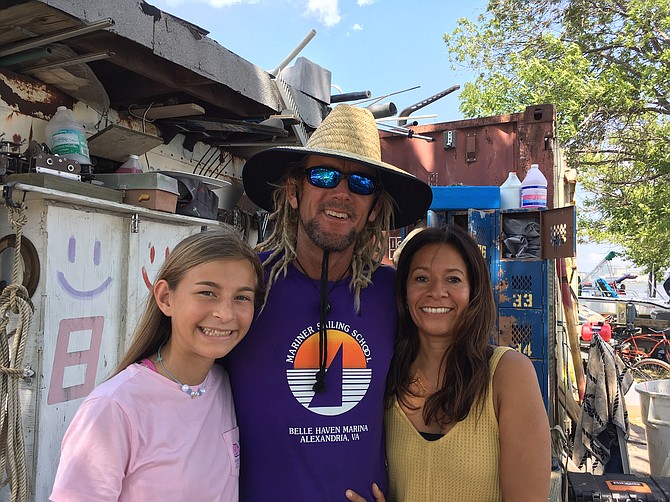 The Johnston family is used to life on the water.

When the record rainfall occurred on Monday, July 8, the water, trash and plastic water bottles flowing off the land into Belle Haven Marina was a

Chip Johnston has a love for living on the water.

sight, said dockmaster Chip Johnston, a veteran of the facility where he has been giving sailing lessons for over 20 years.

“No wind after all the rain, I could see the water coming, millions of plastic bottles, it was crazy,” Johnston said.

He’s been coming to that marina since he was a child living in Hollin Hills, and now lives on a boat out in the Potomac River with his wife and daughter. Every year from April to November he gives sailing lessons, oversees the docks, and lives life on the water, away from the corporate, computer world. “I haven’t lived on land since I was 18 years old,” he said. “The computers are ruining humans,” he added.

He oversees sailing, kayaking and paddleboat operations and loves to convey the love for life on the water. After a few lessons, he sees a transformation in his young students. “It gives them a sense of accomplishment,” he said, as a Sunfish sailboat went by in the background with two children at the helm. They were soaking up the sun and enjoying a summer on the river. 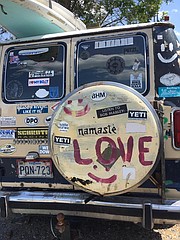 He’s taught sailing at the marina for so long, some of the students return after a few years and teach alongside Johnston.

One of them is Jackie Miles, 16, who will be a junior at West Potomac High School this fall. “I like being on the water,” she said. Miles started hanging out at the marina as a youngster and now works under Johnston. She notices the impact of the lessons on the children as well. “They’re a lot more comfortable by the last day,” she said.

Johnston sees more kayaking and paddleboarding taking place, and these are boat activities “where you don’t need a lot of money,” he said.

The marina at Belle Haven is ideal for lessons and it has plenty of no-wake zones to ride around which is good for beginners. “If you’re serious about boating, this is where you come,” added marina operator George Stevens. Everyone working at the marina had a good tan. It’s part of the lifestyle, reminiscent of Jimmy Buffett’s Margaritaville.

The harbor is owned by the National Park Service, and the marina rents the land at Belle Haven. In the summer, there is more action and many boat owners come and go all day, but the management lays down the rule that there is no living on the boats allowed in the harbor. For some, it means parking the boat out in the river away from the harbor and setting up camp for the night.

One look at Johnston’s van, which he calls “the good times van,” and it is a sign that there’s more to the story than the marina and sailing lessons. “Man, I lived in there for 10 years,” Johnston said. And this included time at Key West, where he’d go in the winter. As he described it, he’d work at one of the town’s hot spots, and then park in front of the establishment and sleep in the van. “The perfect commute,” he said. “Then Key West got to be too weird,” he said.

He knows a couple, John and Marlene, who park out in the Potomac River for some of the year that ride with the wind as well. John plays bluegrass music, and they travel up and down the coast, stopping and putting on a concert when the time is right.

Johnston started this lifestyle when he was four and his father took him out in the Occoquan River on weekends. “It was great,” he said.

Life out on the water takes a mariner’s knowledge of boats and the surrounding area, such as weather and tidal patterns. Johnston has seen his share of folks that head out on a new boat, looking for the freedom that comes with it and finding out it’s not as easy as they think. “You have to know what the weather’s doing at all moments,” he said. “The first winter comes and it’s a whole new ballgame.”

For the Johnston family, winter comes on Dec. 1 when they pack up their lives at the marina and head to Puerto Rico, “chasing the wind,” he said. His daughter Marysol, 12, is homeschooled for that portion of the year.