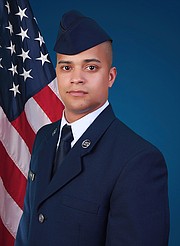 Airmen who complete basic training also earn four credits toward an associate in applied science degree through the Community College of the Air Force.

Dahlum is the son of Michael Dahlum of Lorton and Vondra Brown of Junction, Kansas.

He is a 2013 graduate of Mount Vernon High School. He earned an associate degree in 2017 from University of Central Florida, Orlando, Fla.