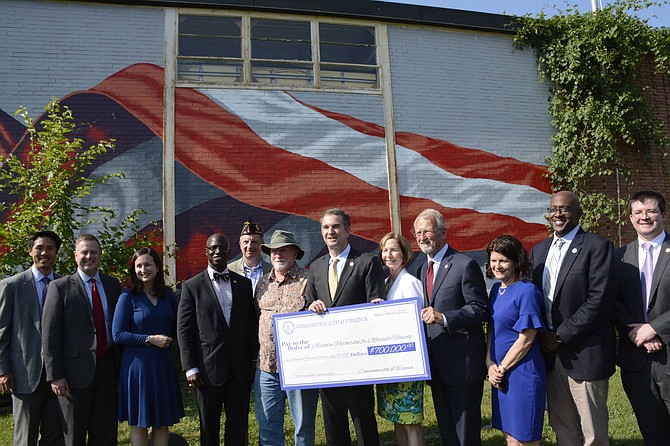 Gov. Ralph Northam flew in and out of Arlington Tuesday, June 4 to announce awards for four housing projects, including $700,000 to the Arlington Partnership for Affordable Housing (APAH) for a new mixed-use complex to be built on the site of American Legion Post 139 on Washington Blvd., where the event was held. The award, from the Virginia Housing Trust Fund, will provide a long-term no interest loan to support the construction of this $75 million project.

Former Post Commander Bill Fahey says they will tear down the current American Legion building and replace it with 160 apartment units of affordable housing with veteran's preference for 80 units. It will also include a first floor condo space with a new home for the American Legion Post plus offices and event space. He estimates the construction will start early next year.

Fahey said the facility will include space for services such as counseling for PTSD survivors and suicide prevention. "There are 22 vets that commit suicide every day. To save one life would be a blessing."

Nina Janopaul, APAH president and CEO, said, "This will be the first project in Arlington dedicated to veterans. It is long overdue. Our commitment is to raise even more money for the services. We are inspired by this."

Northam was introduced as the Commonwealth's chief veteran. He told the crowd he is a member of Post 35. Northam said several years ago Virginia entered the mayor's challenge for the Federal, state and local governments to end homelessness for veterans. "Virginia became the first state to end homelessness for vets. We're all in this together. We take a lot for granted when we have a roof over our heads. I visited a place last week and heard their powerful stories, individuals just like you and me who had a stroke of bad luck."

Christian Dorsey, chair of the Arlington County Board, said the region is facing an affordable housing crisis. "We've tried all of the easy solutions. Now we've got to be creative. We're going to include special wrap around services to show how we honor and care for our veterans." He added the county had dedicated $11 million in local funds to the project. "We're really thrilled. We'll transform lives."

State and local officials attended the event, including Carlos Hopkins, secretary of Veterans and Defense Affairs for the Commonwealth of Virginia; Erik Johnston, director of the Department of Housing and Community Development for the Commonwealth; state Sen. Barbara Favola; Del. Patrick Hope; Arlington County Board Chair Christian Dorsey and past chair Katie Cristol.

APAH's mission is "to develop, preserve, and own quality, affordable places to live; to promote stability and opportunity for our residents; and to advocate with the people and communities we serve." APAH was founded in 1989 and now helps nearly 1,600 households live in affordable housing rental units with 900 additional homes in the pipeline.

Fahey said, “What APAH contributes to the community is saintly. They are an under appreciated resource in Arlington.”