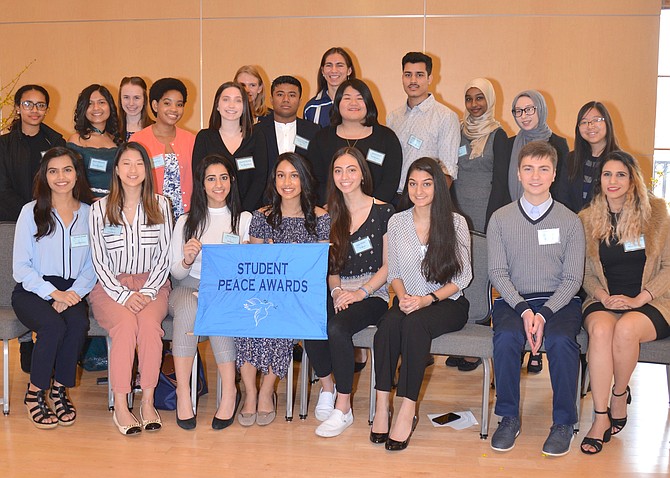 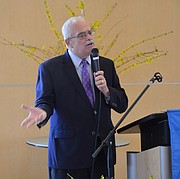 Four local students from Centreville and Chantilly were honored as recipients of the 2019 Peace Awards.

Romina Soleimani from Mountain View High School started her peace work in her home country of Iran, where she worked with Youth Spiritual Empowerment, a global Bahá’í-inspired program which encourages youth to grow spiritually, develop a strong sense of purpose, and engage in meaningful social action. When forced to leave Iran because of her beliefs, she continued her peace work in Turkey, sometimes meeting in parks. She and her mother then moved to the U.S., having been granted asylum as religious refugees. Romina again became a leader in the Youth Spiritual Empowerment Program and hopes to continue her work while in college.

Deepika Joshi, a senior at Centreville High School, was born in Nepal and entered U.S. schools in the fifth grade. She is the founder and president of her school’s chapter of STAR – Students Together Assisting Refugees. So far, she has recruited 35 members to help refugees overcome the hurdles which often cause them emotional, mental and physical distress. Together they fundraise for the UN Refugee Agency, collect clothing for refugees in Bosnia and Syria, and write letters of support and encouragement to Lebanese children.

“If I can inspire just one person,” she said, “then that person may inspire another. At the end, this will allow us to forget what separates us and to focus on what binds us together.”

Yahang “Annie” Wang, a senior at Chantilly High School, immigrated to the U.S. from China 10 years ago. She and her family faced discrimination due to the language barrier, but Annie says that her discovery of rap music helped her appreciate the beauty of the English language and helped her to express herself by writing lyrics. She performed one of her compositions at the Virginia Girls State Conference on female empowerment and the inequalities women face in society.

She has been on the FCPS Student Advisory Council for the past two years. “I have been able to advocate for fellow immigrants, inspire low-income families and help empower young women.” She feels compelled as a first-generation immigrant to “give back to the community that’s helped me thrive in my times of need.”

Maxihikio (Makee) Neves, a Westfield High School junior, is a member of the Citizen Potawatomi Nation and a descendant from other tribes.

He came to Westfield a year ago, from a school in Colorado where he was one of several Native American students. He turned the experience of suddenly becoming a minority into an opportunity to learn, and to help others learn, as well. Organizing the Indigenous Student Union, he and others now prepare displays for Westfield Culture Night and other events.

Upcoming plans include a Q&A Student/Community evening about indigenous people, a coat drive for native youth in need, a field trip to the National Museum of the American Indian, and more.