Virginia: And They’re Off!
Votes

Virginia: And They’re Off! 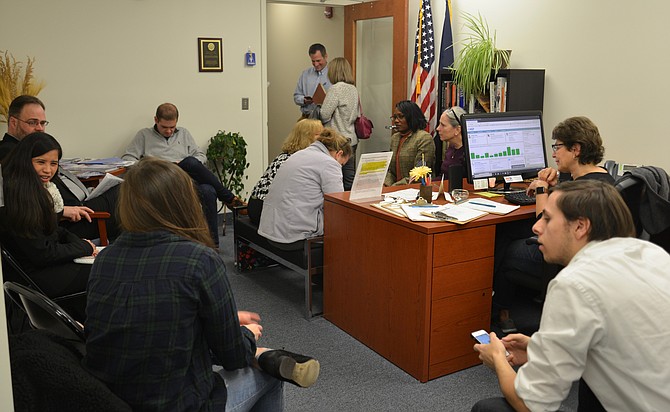 Just waiting. Democratic candidates for 2019 local elections crowd the reception area — and the staff kitchen, and the hallway — of the Fairfax County Democratic Committee headquarters in Fairfax, waiting for the clock to strike noon, the moment when they can officially present their “Declaration of Candidacy” packets. Photo by Andrea Worker.

Todd Thurwachter, a volunteer from the Providence Magisterial District, and Janice Yohai, Vice Chair, Voter Registration and Education for the Democrats in the Braddock District were also in the office, strategizing and gathering materials ahead of several voter registration and education outreach events.

There are an unusually large number of political seats up for grabs in this year’s local and General Assembly elections. In Fairfax County alone, more than 50 offices are on the ballot, including nine State Senators, 17 House of Delegate Members, nine Board of Supervisors Members, Board of Supervisors Chairman, Commonwealth’s Attorney, Sheriff, nine District and three At-Large School Board Members, and three Soil & Water Conservation District Directors.

If the list reads a bit like the ingredients for a recipe, then it’s an apt analogy. The people whose names will eventually fill in the blanks of those local numbers after the Nov. 5 elections will combine to form the governing bodies for the 1.2 million or so residents of Fairfax County.

THE DEMOCRATIC HOPEFULS wishing to fill those legislative, constitutional and local office seats have to first emerge victorious from the June 11 primaries, the method chosen by the Democratic nominating committees.

Monday, March 11 at twelve noon was the first moment they could present their “Declaration of Candidacy” to their respective nominating committees, accompanied by the required petitions of support from residents of their districts and the receipt showing payment of their filing fee.

Some of the nominating committee chairs chose locations within their districts to begin the application acceptance process, particularly for State Senate and House of Delegates positions. Private homes and local coffee shops and restaurants became political hubs in Annandale, Falls Church, Springfield and Reston among others, but the big draw for the Board of Supervisors openings and the Constitutional offices of Sheriff and Commonwealth’s Attorney, State Senate District 35 and House District 41 had the candidates lining up at the Fairfax County Democratic Committee (FCDC) headquarters on Park Avenue in Fairfax.

The bell rung, literally, at high noon and while the applicants may be readying to square off in the political arena, the gong only produced a civilized rush to the filing “ring.” The atmosphere at this point was cordial. No “punches” of any kind, only polite chatter and a “best of luck” and a “here we go!” or two exchanged among them.

If the process to secure the coveted first place on the ballot hadn’t been changed from “first at the table, first on the ballot” things might have been a bit more interesting, but these days a candidate’s ballot placement is decided more by luck of the draw – with one major factor to either enhance their chances or guarantee their name will appear down the list.

“We used to have people practically camping out, or showing up at dawn,” said FCDC Executive Director Frank Anderson, who supervised the action. “Now, everyone who is here at 12 when we close the doors is clocked in at a simultaneous time and has an equal chance of being number one on the ballot.”

After those on-timers are processed, candidates’ names are placed on the ballot in order of submission. Of course, if you are running unopposed, as is the case of Board of Supervisors Mason District Penny Gross (at least at press time), arriving after the rush had already dissipated is no problem – her name will still get the top spot.

As a testament to Anderson’s organizational skills and the efficiency of the intake crew, by 12:15 p.m. the crowd had cleared and the FCDC crew were readying the candidate packets for stage 2 – submission to the State Board of Elections and Party Headquarters for review and validation of the petitions.

Peg Willingham had one of the smallest stacks to handle. The resident from the city of Falls Church is a first-time volunteer for this activity, although she has been an active member of the Party locally for a long time as is the current chair of the Falls Church (City) Democrats.

“Honestly, I just felt it was time to take my turn at this piece of the Democratic process puzzle,” she said.

LUCKILY, as she was in-taking for Virginia Senate District 35, which includes the city of Falls Church, Willingham only had to handle the candidacy application for incumbent Sen. Richard Saslaw whose paperwork was presented by a staff representative. Since that means a first-look to validate the petitions (for primary candidates that’s 250 valid petitions for State Senate, 125 for the House of Delegates, and 125 each for Board of Supervisors and the Constitutional positions), Willingham and her Falls Church committee can count themselves fortunate on this first filing experience.

“It’s been a year of more, more, more,” noted Anderson. “More open positions (53), more candidates (an estimated 80) and more people joining the FCDC so they can be part of the process.” Anderson says they have added 1,000 new members in just the last 90 days. “It’s good for our Democracy. I’m glad to see so many people engaging.”

Some of the explosion of interest in running for office and in voter engagement is thanks, in large part, to the upcoming Fairfax County Board of Supervisors shuffle prompted by the retirement of long-time Chair Sharon Bulova, Supervisors Linda Smyth (Providence), Cathy Hudgins (Hunter Mill) and John Cook (Braddock) declining to seek re-election, and Jeff McKay looking to move from representing the Lee District to chairing the board as Bulova’s successor.

“2020 will mark the biggest change in the makeup of the Fairfax County Board of Supervisors in recent history and we’re seeing a great pool of dedicated citizens who want to actively work for our community,” said Anderson.

Potential candidates have until 5 p.m. on March 28 to submit their completed candidacy paperwork, so stay tuned. Future editions of the Connection will spotlight the candidates as they launch campaigns and participate in debates, forums and community events in hopes of claiming victory first in June, then ultimately in November.