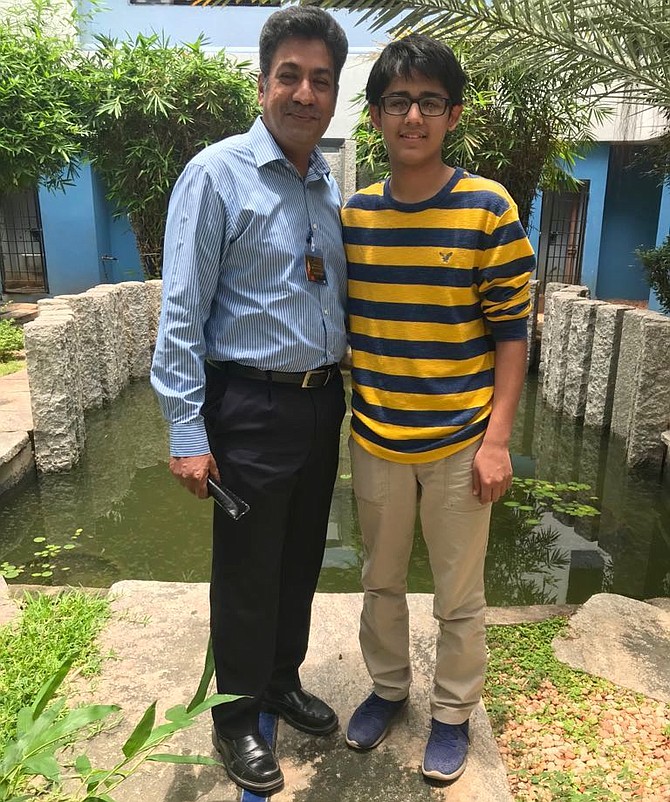 Avyuk Dixit will never forget seeing his uncle in New Delhi struggle with the effects of glaucoma, an eye disease that affects the optical nerve, and one of the leading causes of permanent blindness. Watching a loved one suffer in this way just didn’t sit right with Dixit, a Mount Vernon resident who was only 15 years old at the time.

Even after returning to the States, Dixit couldn’t shake thoughts of what glaucoma was doing to someone in his family.

“Between my freshman and sophomore year, I was visiting family in New Delhi, where I learned that my uncle, a teacher living there, had been diagnosed with glaucoma,” said Dixit, a junior at Thomas Jefferson High School for Science and Technology (TJHSST). “Visiting him, I saw how his declining vision hurt his ability to teach, to read fine-printed textbooks, and how it generally detracted from his livelihood. Seeing him suffer like that made me realize how privileged I was and pushed me to do something to help him and others who might have glaucoma.”

Dixit buckled down to support his uncle beyond offering up thoughts and prayers. He channeled his technical skills — specifically, with coding and machine learning — toward something that could one day make a difference for people in India who face glaucoma.

“After my uncle was diagnosed with glaucoma, I realized how I could apply my skills with machine learning and computer science to healthcare,” Dixit said, adding that machine learning is “the study of how algorithms and statistics can be used to effectively perform tasks without explicit instructions. It’s the idea that a computer can learn relationships and find data that we might not have been able to see otherwise.”

Not even old enough for a driver’s license at the time, Dixit began working on a machine learning model to provide an efficient, affordable way for doctors around the world to diagnose glaucoma.

“The basic idea of the model is that there is an algorithm that looks at all the images and takes into account the markers that doctors have determined to be consistent with people who have glaucoma,” said Dixit, who completed his model at the end of last summer. “We have the machine learn those markers. This novel approach made it easy for a non-linear Support Vector Machine to classify the pre-processed images…ultimately diagnosing glaucoma with a top accuracy of 87 percent.”

The more Dixit learned about glaucoma during his initial research, the more personal this solution became. Out of the 60 million people diagnosed with glaucoma worldwide, 12 million of them are — like Dixit’s uncle — in India.

“Undiagnosed glaucoma is a more significant problem in India than it is here in the United States, where we have regular eye check ups that include intraocular pressure tests,” he said. “In India, however — especially in more underdeveloped areas — many people don’t have access to ophthalmic check-ups or the infrastructure to ask for help when they notice that their vision is declining.”

The longer it takes to diagnose glaucoma, the more likely it is that the disease will cause irreparable optical damage.

“Glaucoma is different from other eye diseases in that we don’t know what causes it, so we don’t have any sort of cure for it,” Dixit said. “It worsens over time and can lead to irreversible blindness. Early detection is key to make sure that it doesn’t get to the point that you can’t mitigate its effects. Since early detection of glaucoma can save the disease from snowballing into blindness, I wanted to find a way to contribute to early detection.”

Last year, Dixit linked up with Dr. Rengaraj Venkatesh, the chief medical officer at Aravind Eye Hospital in Pondicherry, India. And in the summer of 2018, Dixit’s quest to halt glaucoma in its disastrous tracks came full circle, when he returned to India finish his project. It was there that Dixit reached the necessary conclusions for completing his machine learning model.

“Aravind Eye Hospital is a nonprofit organization, and a branch of the largest eye care provider in the world,” Dixit said. “Dr. Venkatesh offered to bring me to India to pursue my work in creating a machine learning model to diagnose glaucoma based on fundus [back of the eye] images and integrate the model with the infrastructure at Aravind.”

As enriching as this visit was for Dixit, it was invaluable for Aravind’s team of doctors.

“We have been hearing about artificial intelligence (AI) and machine learning for quite some time, so it was indeed great to have Avyuk in Pondicherry with us,” Venkatesh said, “His commitment and focused work were amazing to see, so I invited him to talk to our residents about the basics of AI. They were surprised and impressed seeing his excellent presentation and they appreciated his work, especially coming from someone of such a young age.”

For most of August, Dixit worked with the Aravind Eye Hospital team in Pondicherry, India. He spent his days observing their work, attending professional conferences, and participating in their community outreach.

“I spent a large amount of my summer thinking about and working on my program,” Dixit said. “I created the diagnostic program on my own, but I did receive help and guidance with improving my methodology. I also used about two weeks of my time in Pondicherry at Aravind developing my research alongside world class ophthalmologists and researchers to get my work to the next level.”

One key weekend while in southern India, the young technology prodigy assisted the doctors at one of their eye camps, when Aravind eye doctors and medical staff set up mobile offices in villages to treat people who wouldn’t otherwise be able to seek optical care.

“Students aren’t typically involved with eye camps,” Dixit said. “I was the only one there the week I went, and the main reason I attended was to get a feeling of how my model could be integrated as a screening tool with Aravind’s system. I also really saw the importance of Aravind’s work in helping the community become more aware of eye diseases such as glaucoma.”

At this eye camp, Dixit saw firsthand just how important it was to complete his machine learning model.

“The diagnostic machines that doctors in the States use are effective, but expensive,” Dixit said. “The best technologies are too expensive for developing countries, so most people at Aravind now diagnose on their own in eye camps. But there are only so many ophthalmologists and resources. Algorithms and machine learning models mean that we don’t need actual people screening for glaucoma. Models like mine make the diagnostic processes more efficient, utilizing less resources.”

When Dixit says “less resources,” he means it. With his coding prowess, he created a diagnostic system that is essentially an application compatible with mobile devices.

“My model can run on anything that can process fundus photography,” he said. “It could even be on a cell phone.”

It’s possible that one day Aravind will use regularly use Dixit’s model at eye camps.

“I’m in regular touch with Dr. Venkatesh because we’re still in the process of integrating my model with their processes,” Dixit said. “We’re working out details of how that will happen. It will hopefully soon be used at eye camps and vision centers in Pondicherry and surrounding area. In total, Aravind serves over a quarter of a million people in its eye camps yearly, and imagining my technology helping those people to such a large scale is humbling.”

“We’ll be working together for some time to make sure it’s a really good model,” Venkatesh said. “I believe different people across the globe are working on similar models, but this one will be very special to validate and work on.”

Dixit’s passion for and efforts toward saving the world don’t end with glaucoma.

“This year for my school science fair, my friends and I worked on creating a violence detection model that utilized emotion detection, human pose estimation, and non-contact heart rate detection to spot instances of violent behaviors in public venues and cities,” he said. “We recently just won at our school science fair in our category and are advancing to regionals.”

In addition to handling a demanding course load at TJHSST, Dixit also runs his own machine learning business.

“I’ve been working with the folks at the Mount Vernon Estate to use analytics to find a relationship between weather and daily tourism numbers,” Dixit said. “I also have my own small business, Linkpedia, through which I’m hoping to help apply machine learning to help other people solve their problems.”

Not even a high school graduate and Dixit has already made his mark on more than one continent.

“Avyuk has pushed many boundaries and already has made strides toward making our world a better place for all,” said Mount Vernon District Supervisor Dan Storck. “It is achievements like these that will help solve the challenges we face as a society.”

As for Dixit’s uncle, and his challenges with glaucoma?

“We’ve talked at every stage of getting this model up and running,” Dixit said. “I’m always in touch with him. He’s doing a lot better. He was diagnosed in time and started getting treatment. He’s been able to continue pursuing a successful career in teaching.”