Trafficking in Our Backyard
Votes

Trafficking in Our Backyard

Citizens Advisory Group learns more about human trafficking and how to fight it. 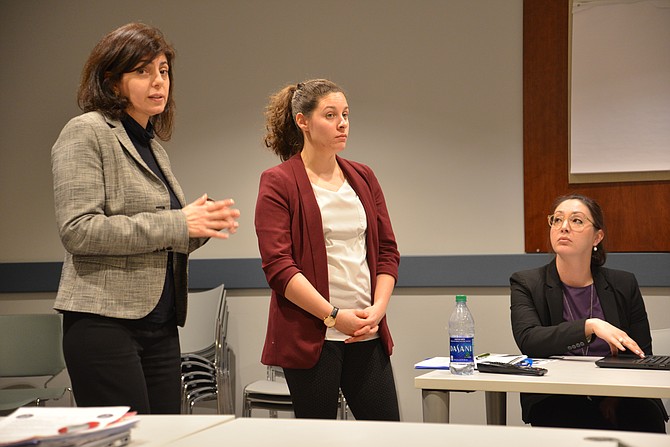 Human trafficking does take place in Fairfax County. As Springfield District Supervisor Pat Herrity wrote in an op-ed for The Connection during January’s Human Trafficking Awareness Month, “with cases involving all 26 high schools in Fairfax County, we cannot fall into the mind-set that it could never happen to us, never to our kid.”

There are statistics. Fairfax County Police Department reports on calls to investigate trafficking both for sex and for labor. The National Human Trafficking Hotline tallies 179 victims identified in Virginia in 2017, with 96 traffickers and 87 trafficking businesses identified in the Commonwealth during that same year, but even the experts are sceptical of those numbers.

“Trafficking is such an under-reported crime that even ‘official’ website data has to be questioned,” attorney Alexandra Lydon with Legal Services of Northern Virginia (LSNV) warned the audience at the McLean District Station Citizens Advisory Committee March meeting.

Lydon joined her colleague Alina Launchbaugh, an Equal Justice Works Crime Victims Fellow with LSNV, and attorney Lourdes Venes for a presentation to the committee on the subject. Venes, a native of Peru and a McLean resident, is a member of the Advisory Committee and volunteers for the Northern Virginia Human Trafficking Task Force.

TOGETHER, the three women brought a wealth of current information, resources, and compassion to the panel.

“We are grateful to have you all here,” said Patrick Smaldore, the Advisory Committee’s chair. “We know that trafficking often goes unnoticed because people don’t know what to look for or how to respond, so we are pleased to have this opportunity to learn more and do more.”

According to the Federal Bureau of Investigation, human trafficking is on track to surpass drug trafficking to move from its second place on the criminal tier to the top spot.

Virginia as a whole has seen more trafficking evidence than ever. In Northern Virginia, “we are a prime location,” said Lydon. Situated within a major metropolitan region with millions of potential victims, millions of residents in which to hide or find clients, and as many, or more, visitors from around the globe, NoVa is part of the 95 corridor that allows easy access from north to south, with plenty of room for traffickers to work their trade and move away quickly when they suspect they are attracting law enforcement attention.

In today’s often anti-immigrant climate, non-citizens, regardless of their legal status, are also more vulnerable than ever to both sex trafficking and forced labor, so their population has experienced increased victimization into what Lydon describes as “modern day slavery.”

This enslavement can be as sudden as an abduction, either locally or from abroad. But it is often the result of gradual manipulation and gentle persuasion, sometimes with gifts or flattery or just the attention that a youngster may be seeking.

The slavery can occur in the physical sense, with victims literally being held captive, but is often an enslavement based on psychological or physical abuse, or even blackmail.

Lydon described a situation in which a victim was invited to a party by an online “boyfriend.” At the party, the victim was drugged and raped and the assault was filmed. The trafficker used the threat of blackmail, threatening to release the film widely on social media, if the victim does not comply by “agreeing” to further sexual exploitation.

Frequently, younger victims don’t know what’s happening or how deeply they have been caught in the trafficker’s web until the trafficker will coerce compliance with threats to the victim or their loved ones, or with verbal or physical abuse, if the victim has not fully “bonded” to their trafficker.

“And that does happen,” noted both Lydon and Launchbaugh, where the victim becomes emotionally dependent on the trafficker and is unwilling to testify or even speak out against them when the situation is brought to light.

The speakers also brought up another long-term and devastating side effect suffered by survivors of human trafficking, in addition to the actual abuse.

MANY VICTIMS are forced to commit crimes, like shoplifting or burglary, and those who are made to solicit sex publically can often be arrested for prostitution.

Most states, including Virginia, do not have a means by which trafficking survivors can expunge their criminal records, so they carry that extra burden when trying to re-establish themselves.

The protocols surrounding Lydon’s and Launchbaugh’s work prevent them from lobbying or advocating for legal change, but they are able to inform their audiences that a survivor’s inability to clear criminal records often means exclusion from schools, jobs, financial assistance and more.

The experts and those involved in aiding the victims all agree;

breaking this trafficking cycle starts with information – getting the word out about the existence of the problem in our own backyard, and what to look for in potential victims and those already enslaved.

Some things to look for or that should arouse suspicion both for potential sex or labor trafficking recruitment attempts:

Some indicators that someone may be a victim of trafficking:

If there is any way to safely ask the suspected victim about their status or their need for assistance, do so, but the experts warn that traffickers are dangerous and have a lot to lose. If you suspect trafficking, the best recourse might be to contact your local police or the National Human Trafficking Hotline at 1-888-373-7888 or text 233733 (BEFREE) for advice and to report your suspicions.

“Doing nothing is not the answer,” say Venes, Lydon and Launchbaugh. Get even more informed on the issue, inform others, and consider volunteering with an organization that works to prevent human trafficking and assist its victims once they have been freed from their enslavement.