School’s drumline group lands in 15th place at a competition in Dayton, Ohio. 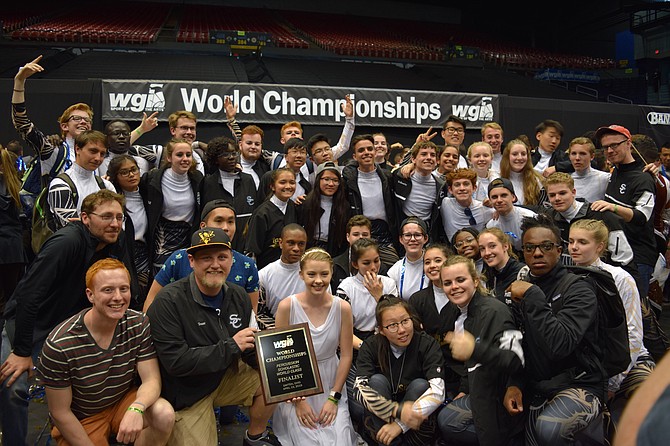 The South County High School drumline group gained national attention as they landed in 15th place at a competition in Dayton, Ohio recently.

End of the Year Concert

Among hundreds of other percussion groups from high schools around the country at the “WGI: Sport of the Arts Percussion World Championships,” the indoor drumline team pulled it off with their “Don’t Look Back,” theme based on Greek mythology. “We were the strongest school from this state,” said Charlie Gorham, a senior that played the tenor drums.

“It’s very difficult to get to the level we were at,” added Sam Belkowitz, a fellow senior that plays the marimba, a xylophone-like instrument.

There’s 39 students on the drumline group, which is an offshoot of the main marching band at South County. All play percussion instruments following a certain theme for the music they’re entering in the competition. They spent four days in Dayton, with 10 parent chaperones, and their accomodations were sleeping in a gym at the local YMCA. It didn’t seem to phase the students. “We drove in mini-vans and two trucks,” said Gorham.

There was the preliminary round, the semi finals and finally the finals on the third day.

Charlie Gorham has been on the drumline team in previous years at South County. Throughout his school career, the drumline team has played a big part, although now he’s got a few weeks left before graduation. “I miss it already,” he said. Being in the band was more then just playing the music. Belkowitz felt they were like a family and motivated each other constantly. “We got to make great friends that we’ll know for the rest of our lives,” he said. There are drumline bands at Chantilly High School, Fairfax High School and Thomas Jefferson.

Linwood Gorham, Charlie’s father, has seen the impact the band experience has made on his son. “He’s obsessed with music,” he said. “South County High School has made him what he is, that’s a top-notch music department in that school,” he said.

Charlie and Sam have a summer to relish their accomplishment and work music into their schedule as they get ready for college in the fall. Charlie Gorham will spend the summer working at a local air conditioning company before heading off to George Mason University, where they also have a drumline band. He’s studying music. Belkowitz is working at the same summer camp in Pennsylvania where he worked last year, and is heading to Miami University of Ohio in the fall.