Not Just Another Pretty Tune in Arlington
Votes

Not Just Another Pretty Tune in Arlington 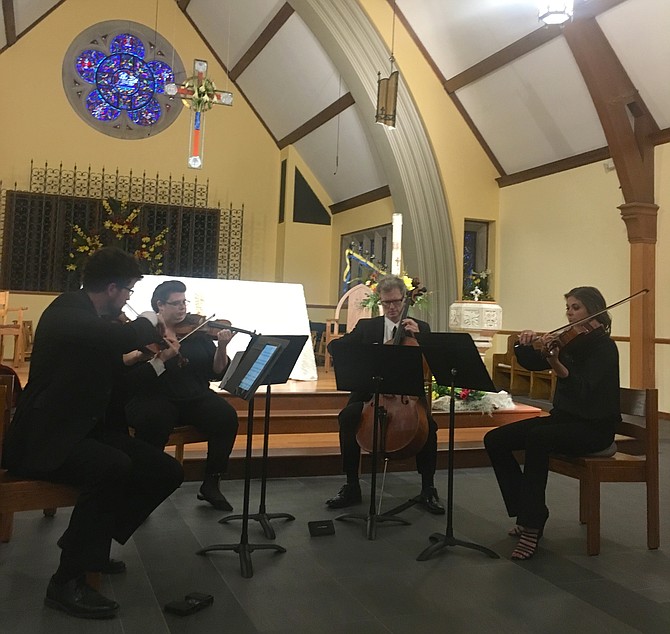 The Ninth Street Quartet is the “quartet about town” and the Quartet-in-Residence of Crescendo, the youth chamber music program of Arlington Philharmonic. The four musicians are award winning performers, whose gift for uninitiated listeners is their ability to teach them how to appreciate the music. They are (from left) Matt RIchardson, Jennifer Wade, Andrew Rammon, and Elizabeth O’Hara Stahr. Photo by Eden Brown.

When violinist Matt RIchardson introduced the music, he cautioned that he, too, was a little wary of music written after 1989 when he first started playing these pieces. He became interested thanks to the best known of the five composers featured in the concert: Philip Glass. From then on, he realized music by living masters, even with its different tunings and sometimes discordant notes, could surpass many of the famous, but less diverse, 18th and 19th century composers.

Richardson noted the things the composers were doing were effective In stirring emotion; sometimes the device was as simple as repeating the same phrase and then changing it slightly for effect.

The audience could almost predict, watching cellist Andrew Rammon’s face, when the music was going to become particularly moving; his expression anticipated the emotion of the chords of the first piece, “Fratres,” written in 1989 by Arvo Pärt, just before they resonated through the church. The second piece, “Tenebrae,” by Osvaldo Golijov, born in Argentina in 1960, was written in 2003, and as a result of Golijov’s peripatetic life, first moving to Israel in 1983 and then the U.S., the sounds of South American birds and Israeli dances were discernible; Richardson’s suggestion to listen for them didn’t hurt.

“Appalachian Polaroids,” by Steven Snowden, born 1981, delighted the audience with its juxtaposition of the regional song, “Black is the Color of my True Love’s Hair, ” helped again by Richardson’s explanation of context. Violinist, Jennifer Wade, and the viola player, Elizabeth Stahr, were enjoying themselves. “On the Nature of Daylight”, by Max Richter, born 1966, was one of the “easiest listening” pieces of the evening and “String Quartet Number Five” by Philip Glass, written in 1991, was one of the more intense pieces, not just because it had five movements and came at the end of concentrated listening, but because it was a dynamic piece that gave the whole quartet an intense arm workout.

The audience gave the performance an enthusiastic response, with several commenting afterwards that they had been amazed that some of the composers were younger than their children. They agreed all five composers were worth discovering, and Richardson was delighted that he had been effective in one of the missions of the 9th Street quartet: To provide dynamic programs with insightful commentary, in unique venues, sometimes with a glass of wine in hand.