Tree Only a Memory, But Supporters Remain in Arlington
Votes

Tree Only a Memory, But Supporters Remain in Arlington

Just one battle in the fight to save tree canopy. 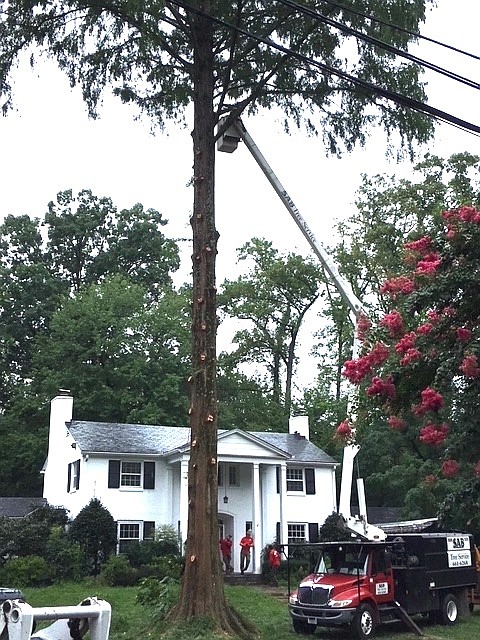 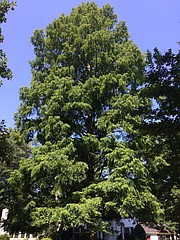 Kit Norland, one of the core members of the Arlington Tree Action Group (ATAG), reminded the County Board at its monthly meeting Tuesday, April 23 that they had "promised a public memo that would explain the legal and policy reasons the county did not prevent a developer from tearing down the beloved dawn redwood tree on N. Ohio Street although it was located in an official Resource Protected Area (RPA)."

Last year at about this time, a struggle began between a group of Arlington conservationists and the developer, Richmond Custom Homes. Richmond Homes had purchased a lot on N. Ohio Street and filed plans indicating they would replace the existing structure with two new homes and tear down a 114-foot heritage dawn redwood tree on the property.

A back-and-forth ensued between the neighbors and conservationists and the County Board. The tree's supporters circulated a petition with over 1,000 signatures in early June, wrote to the County Board on June 22 and appeared before the County Board July 14 to make comments defending the tree which is the largest of its species in Virginia and a state recognized champion.

The conservationists' argument stemmed from the location of the dawn redwood in an RPA, which was designed to protect our local streams and the Chesapeake Bay from pollution due to land use and development. At that time ATAG said, "This has the makings of a landmark case. A champion tree and the RPA in which it is located are at stake; the loss of either would call into question the enforcement of the Chesapeake Bay Protection Ordinance not to mention the county processes used to designate champion trees and RPAs."

The County Board expressed its sympathy, but said their hands were tied. "…In terms of legal protection, this is an honorary recognition only. The tree is not protected under state law or county designation." In a letter sent by the County Board on Aug. 15 they advised that "the owner has considerable development rights under State and local law."

The conservationists argued that the county manager on behalf of the County Board may seek injunctive relief to enjoin a violation for a threatened violation of any provision of Section 61-176 of the Chesapeake Bay Preservation Ordinance. Residents wondered why he didn't do that.

After months of battling, the tree demolition began, and on Aug. 21 the limbs of the dawn redwood began to fall to the ground. The conservationists had lost this battle. But the public had been promised an explanation of the board's reasoning behind the dawn redwood decision.

John Vihstadt, a county board member at the time and the liaison to the Urban Forestry Commission, said in late August 2018, "The board has asked the county manager and county attorney to collaborate on a public-facing document that will go into as much details as possible in explaining the permitting process, the county's site analysis in the context of the Resource Protection Area and the rationale for the ultimate conclusion that the county could not legally mandate that the dawn redwood be saved." That was eight months ago.

Norland said she spoke to County Manager Mark Schwartz after the April 23 county board meeting, and Schwartz said the memo is underway and his hope is to get it on the street in May.