Cappies Review: A Sight to See in Vienna
Votes

Cappies Review: A Sight to See in Vienna 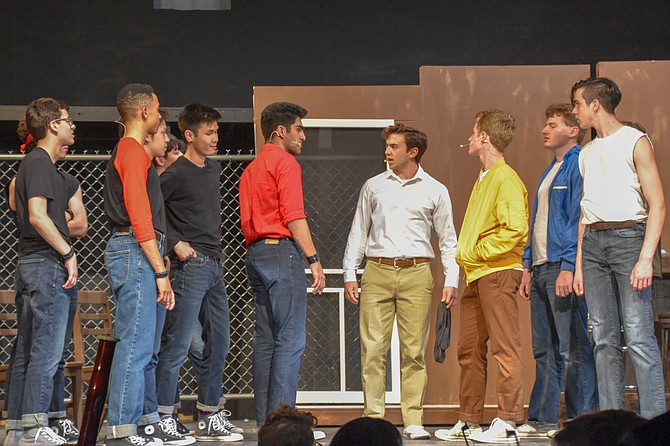 The lights go up on an empty 1950s New York street, one boy walks on and whistles, and with that the story of rival gangs and star-crossed lovers begins. James Madison High School's production of Arthur Laurents, Stephen Sondheim, and Leonard Bernstein's “West Side Story” started out with a bang, and it only got better from there.

“West Side Story” is a legendary musical based on William Shakespeare's Romeo and Juliet. It takes place in the rugged Upper West Side of 1950s New York. The musical follows two gangs, the Sharks, a gang of Puerto Rican immigrants, and the Jets, a white gang, as they fight over territory. The divide between the gangs seems set in stone until Tony, a Jet, falls in love with Maria, the sister of Bernardo, the leader of the Sharks. The two cross enemy lines to be together, but will their love cause more damage in the end?

James Madison High School brought this iconic show to life. The large, energetic dance numbers and passionate singing brought the audience back to classic Broadway. The balance between the more humorous first act and the dramatic second act was impeccable, and the violent fight scenes had the audience at the edge of their seats.

Zach Spafford and Stella Moner as Tony and Maria were a breathtaking duo. Spafford's raw emotion and strong voice filled Tony with so much energy, and Moner's almost operatic voice was absolutely stunning. They somehow enhanced each other's voices so well that they sounded even better together than they did by themselves.

The Jets were an energetic ensemble, and every actor had their own distinct character and personality. Logan Neville, who played Tony's best friend Riff, stole the show. His precise dancing, melodic voice, and cool composure enhanced the character and immersed the audience fully into his performance. Henro Kriel and Spencer Kury as A-Rab and Baby John were another dynamic duo. They perfectly maintained the balance between comedy and drama throughout the show.

The Sharks complemented the Jets' energy beautifully. The female dancers honed in on their characters and added energy to every dance that they were in. Maria Christou, who played Anita, Bernardo's girlfriend, fully embodied the character and complemented Stella Monner wonderfully. Ryaan Farhadi as Bernardo had a menacing energy that he maintained throughout the show that was perfect for brooding Bernardo.

The aspect of the show that stood out the most was the dancing. From the ominous prologue to the playful gym dance, each number was filled with precise movements and high energy, and the cast maintained their faces and characters even while perfectly executing the complex dance moves. "Gee, Officer Krupke," a playful and comedic number, was a definite highlight. Ben Eggleston as Action led the number with almost manic yet completely hysterical movements.

The technical aspects of the show wonderfully complemented the lively energy onstage. The beautiful sets helped to immerse the audience into the world of “West Side Story,” and the set team, Ransom Cain, Rebecca Lewis, and Renee Erickson created everything from a towering balcony to the perfect alley for a rumble. The costume team, Claire Ashby, Sidney Roth, and Lauren Bretl did a fantastic job of creating distinct costumes for the Sharks and the Jets.

Overall, James Madison High School's production of “West Side Story” was truly a sight to see. The huge dance numbers, dramatic fight sequences, and touching romance shone through each member of the Madison cast.