People At Work: So You Think Folding Towels Is Easy?
Votes

People At Work: So You Think Folding Towels Is Easy? 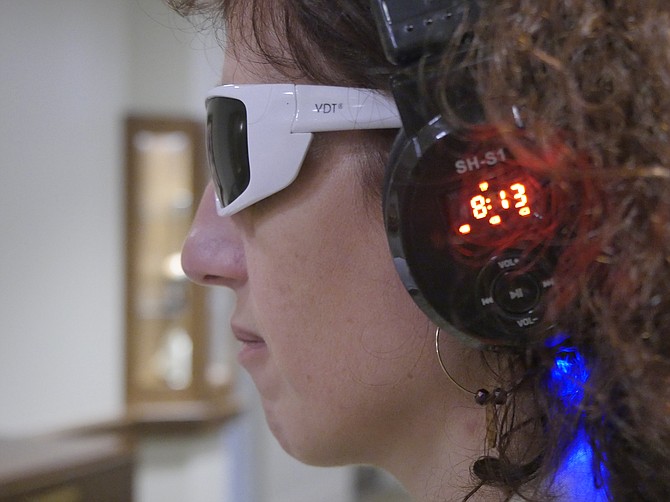 Rachel is one of the two participants in the dementia demonstration. Photo by Shirley Ruhe. 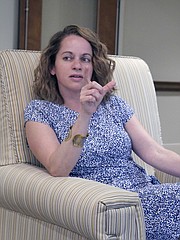 Jane Hughes, family ambassador, hands the large earphones to Rachel. The earphones will play random background noises associated with daily living. Hughes gives Rachel plastic foot liners for inside her shoes to imitate neuropathy and her hands have oversized, bulky gloves. Last come the dark glasses. Hughes says it is a combination of what people may be dealing with.

Hughes instructs the two participants, "You will have simple tasks to perform and once you walk into the room you can't ask any questions." The tasks for Rachel are: to set the clock at 8:50, write down seven brown things you see in the room, fold the white towel, put the belt through the loop in the pants and find a blue tie and put it on."

Pretty easy tasks if you are a normal person, but not for a person with dementia. This simulation of the limitations of advanced age and memory loss at Silverado Alexandria Memory Care Community on King Street is offered for family members of the residents. Corie Dean, director of Resident and Family Services, says they offer these simulations every couple of months, and it can be very moving for the family. "It's like a light bulb goes on for the family."

Katie Hilburn, administrator at Silverado, says that they try to have the associates at Silverado do the simulation as well. “When I did it, I was really bad. I was totally fixated on getting this one thing done, and when I finally did it, I didn't do the rest. It is so noisy and it was so hot in there." She says they hope to offer opportunities for the community to do the simulation in the future.

Since two people slightly overlap in the simulation, but with a different list of tasks, if the person is confused, they may imitate what they see the other person doing. This helped one family understand why their memory impaired family member had often followed them around.

Meanwhile Rachel and Renee finish their simulations. Renee says, "I felt like I was losing my mind. Little needles were poking at my feet. Lights were blinking. So many noises.” Renee's list includes feeding the dog. Renee makes a decision to also give the dog water.

Rachel doesn't know what to, do so she starts folding towels, and instead of one on her list, she folds all of them. "I always make neat square corners, but I couldn't do it with the big gloves, so I tried and tried and then whoof." She throws up her hands. When Rachel hears an alarm, she thinks maybe she should go to the door because there is a fire.

Hughes says, "There are a lot of different inputs to simulate what a memory-impaired resident could be experiencing."

Silverado opened in May 2018 and now has 40 residents who have memory loss for vsrious reasons. The company's residence communities can include those suffering from Alzheimer’s, Parkinson's, trauma or former NFL players. Hughes says everyone's journey is different so they try different techniques. "If they aren't happy, we try something different."

Dean says, "A lot of families are very emotionally involved when they bring their family member here. So I walk them through the process and keep them involved."

She says that they share with families what they are seeing. She adds it is sometimes difficult to have these conversations because as people progress they can lose their inhibitions and use inappropriate speech or more than that. "But the family can feel a social stigma and it helps to know what we have learned is OK."

Hughes says they have a regular routine to have everyone up dressed, "shades up" by 9:30 a.m. with any help they may need for daily living. Then they often have exercise. Next may be current affairs. "We offer them many choices. 'No' is a choice, we call it respectful engagement." She continues, "A lot of them have been isolated but here we reach out and invite them to participate. We have bus tours. A little later in the afternoon there will be a heavy snack and then a musician playing in the lobby."

Hughes says they offer meaningful activities for residents, what the resident is capable of doing. For instance, some of the residents made peanut butter and jelly and turkey and cheese sandwiches for the T.C. Williams High School football practice. "Since the football players aren't big on condiments, it was pretty easy." Now that football is over they are making little bags of Chex Mix for Carpenter House.

Hughes says, "Mealtime is so much a part of our life. There is no charge for a family member to have a meal with a resident. When you get to the point that you can't interact, mealtime is a good time to be together. We have a family-oriented wine night on Friday, and it has become so popular we had to take all the tables from the third floor to the first floor."

A resident wanders by and asks what time is breakfast. Hughes tells the resident "tomorrow morning" but she can have a good snack pretty soon at 3:30. The guitar can be heard down the hall and the residents gather for some songs from the past.