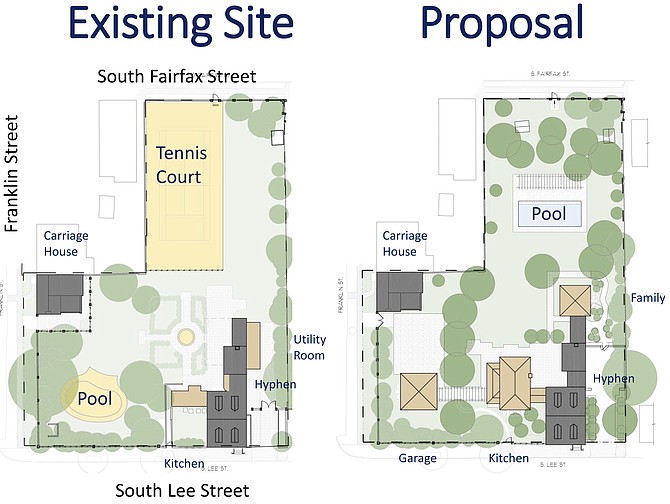 Proposed demolition and construction at the historic Vowell-Snowden-Black House at 619 S. Lee St. in Old Town. Alterations include removing the existing swimming pool, tennis court and a curved part of the house’s brick wall called a “hyphen.” The owners would also build a kitchen addition and “bike workshop garage,” among other things. Extracted from May 14 staff presentation

City Council unanimously upheld on Tuesday, May 14, the Board of Architectural Review’s approval of designs to modify the Vowell-Snowden-Black House at 619 S. Lee Street in Old Town.

The plans, which the Board of Architectural Review approved in a 4-2 vote on Feb. 6, generated pushback. The Historic Alexandria Foundation appealed the decision, sending it to council, out of concern that the proposal threatens the neighborhood’s “the historic character” and “dwindling amount of open space.” Several other organizations, city residents and other interested parties expressed similar opposition, with public speakers pushing council’s recent deliberations past one o’clock in the morning.

In addition to concerns about the size of proposed building additions and particular architectural features, opponents pointed to a 1969 easement on the property under Virginia’s Open Space Land Act. Former owner Hugo Black, a Supreme Court Justice, and his wife Elizabeth Black granted the easement to the state in 1969. The easement — a contract between the Blacks and the Virginia Historic Landmarks Commission — intended “to preserve permanent open-space lands,” including in this case the property’s garden. Opponents asserted that the current owner’s plans, which would reduce the property’s open space by six percent and violate the easement’s intent.

Parties wrangled Tuesday about what role, if any, council has in considering or enforcing the easement.

The prevailing view held that, because the state’s Board of Historic Resources, and not council, holds the easement, the easement shouldn’t play into the city government’s decision. Council can only decide on the basis of its local Zoning Ordinance.

“[The easement constitutes] a contract between the [state Board of Historic Resources] and the property owner and are separate and distinct from the ordinances and restrictions imposed by the Alexandria Board of Architectural Review (BAR),” said Julie Langan of the state’s Department of Historic Resources, which administers the easement on behalf of the board, in an April 30 letter to City Manager Mark Jinks. “Any approvals or disapprovals made by [the Department of Historic Resources] with respect to the easement … should have no determinative bearing on decisions made by the BAR, and any decision made by the BAR will have no determinative bearing on [the department’s] administration of the easement.”

Opponents expressed a different view, asserting that, even though it’s not party to the easement, council has a right and obligation to consider it. John Richards, speaking on behalf of the appellant Historic Alexandria Foundation, pointed to a section of Virginia law pertaining to historic landmarks: Though not ultimately binding upon them, the conferral of landmark status intends “to encourage local governments and property owners to take the designated property’s historic, architectural, archaeological, and cultural significance into account in their planning.”

“We don’t own our property, we are the stewards of the property. I would hope that anybody in Old Town would subscribe to that,” the Old Town Civic Association’s Yvonne Callahan told the Board of Architectural Review in February. She added, citing a 2012 legal opinion: “conservation easements are held and administered by the easement holders, not for themselves, but on behalf of the public.”

“We know there’s a lot of history and stuff, but this is going to be a living, working house,” Lee Quill said in February. “It’s not just a museum to somebody. It’s meant to restore it back so people can enjoy it for centuries to come, which [the owners have] been doing. But they also want to live here.”