Looking Ahead in Alexandria
Votes

Looking Ahead in Alexandria 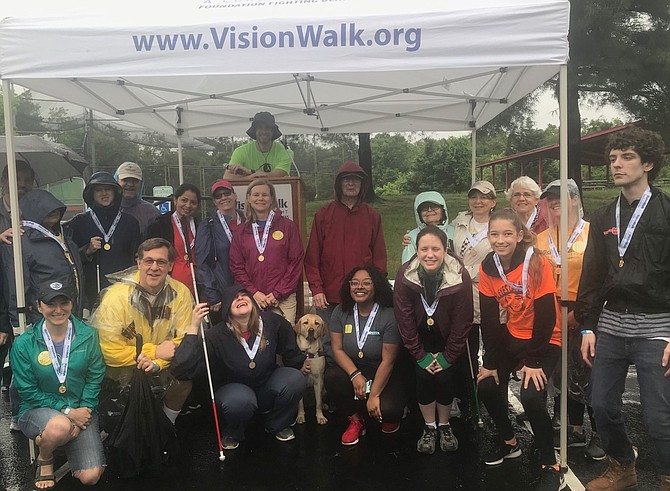 Walkers display their ribbons as the top fundraisers in the May 5 VisionWalk at Cameron Run Park. Photo by Janet Barnett/Gazette Packet

Sporting “all eyes on Aves” t-shirts, Hallis Morris and Leah Taylor surround Averie Earle, who lives with optic nerve atrophy. The trio of friends participated in the 14th annual VisionWalk May 5 at Cameron Run Park.

Despite the rainy skies, families, friends and supporters united to participate in the 14th annual VisionWalk May 5 at Cameron Run Regional Park.

Sponsored by the Northern Virginia Chapter of the Foundation Fighting Blindness, the 5K VisionWalk serves to raise awareness and funds for vision restoring research.

The event featured opening remarks by Dr. Faheem Ahmed, who discussed advances being made in restoring vision. A lively competition among walk participants determined the best t-shirt design, largest team and team with the most money raised.

Since 2006, VisionWalk has raised over $51 million to fund sight saving research nationally. This year’s Northern Virginia walk approached nearly $2 million in funds that have been raised.