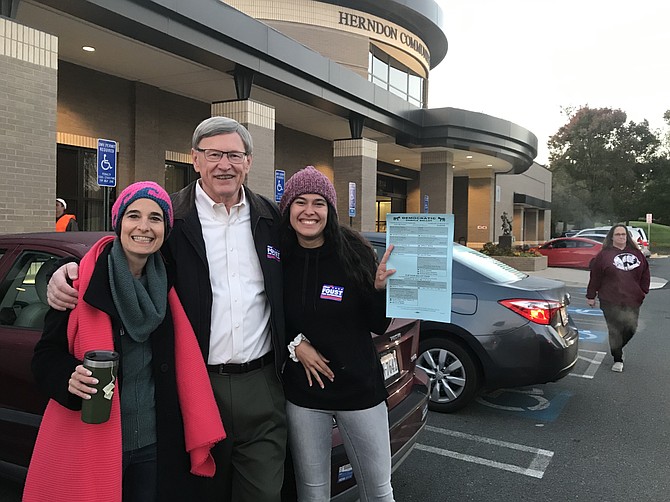 Outside the polling place, Supervisor John Foust (D-Dranesville) mingled with campaign workers and voters. "I think this election is important at the local and state levels. I also believe it is our opportunity to send a message that things must change at the national level," he said.

A member of Foust's campaign staff, Camila Alfonzo of McLean, joined him. "I feel it is important for us to be out here and encourage people to vote," she said.

Joining the conversation about why this election mattered, Boysko said, "This is our one opportunity to use our voices not only at the local level but also at the Federal level that we don't like what's happening in Washington."

Voters continued to stream out of the meeting room turned polling place at a slow but steady rate. One of them, Ines Bello of Herndon, wore her running gear, with a flashlight on her hat. "We came to vote this early because we walk in the morning. I think all elections are important. I think of all the women who suffered for us, and I get very angry when women don't vote or don't do so because they don't like the candidates.”

As for Fairfax County, Sheriff Stacey Ann Kincaid faced Christopher F. De Carlo (R); Joseph G. Galdo (R) opposed Jeff McKay (D) for Chairman of the Board of Supervisors. One school bond issue showed on the ballot for Fairfax County, $360,000,000 to provide funds for "the costs of school improvements... for the Fairfax County public school system."

Asked how this year's turnout compared to other off-years, Chief Election Officer Halpern said, "The Election Board is looking at 50 percent turnout, which, compared to 30 percent at the last off-year, is significant. There's a lot of noise."

The Connection went to press while polling places were still open on Tuesday, Election Day. For results, see www.elections.virginia.gov/2019-election-results/ or www.ConnectionNewspapers.com