Voters Turn Out Early Despite Few Contests in Arlington
Votes

Voters Turn Out Early Despite Few Contests in Arlington 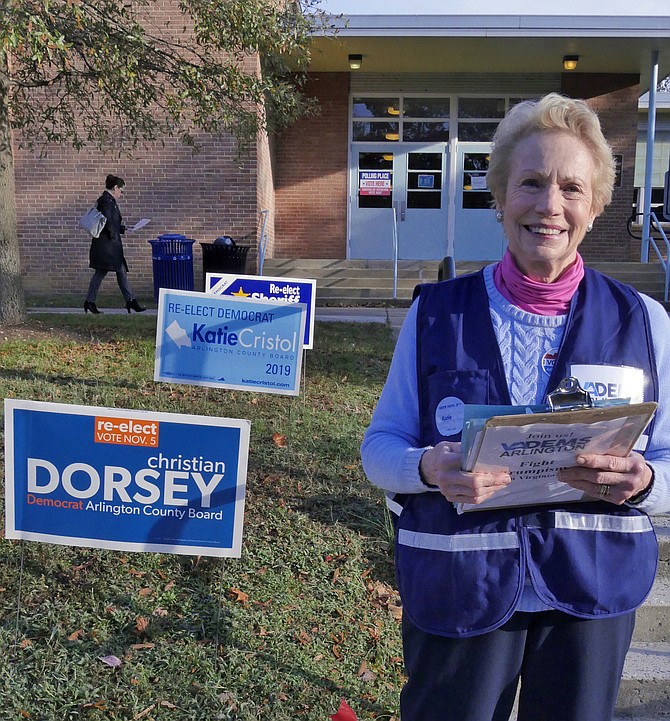 Judy Connally, former Virginia State Delegate, hands out sample Democratic ballots at Madison Community Center voting site. She says although there has been a steady stream of voters, the absentee vote was very healthy this year. Photo by Shirley Ruhe.

Virginia is one of only four states holding elections this year with all 140 seats in the General Assembly on the ballot. Republicans are hoping to hold on to their slim majority in both chambers with Democrats hoping to flip them from red to blue.

A construction worker is caulking the floor along the hallway to the newly renovated Community room at Culpepper Garden as voters filter down the hall toward the voting site. A biker is taking the elevator downstairs to the site and a wheelchair accessible taxi is waiting by the front door.

At 7:30 a.m. the polling site reported 131 voters so far. "They were slow the first hour but picked up the second."

Both parties offered rides to the polls. A representative of the Republican Party indicated they had not yet received any requests for rides this year. The Arlington Dems indicated they have been coordinating rides for over a decade and have contacted voters who have requested rides in the past to see if they need rides again. Many of these voters have accessibility needs.

The Connection went to press while polling places were still open on Tuesday, Election Day. For results, see www.elections.virginia.gov/2019-election-results/ and visit our website at www.connectionnewspapers.com