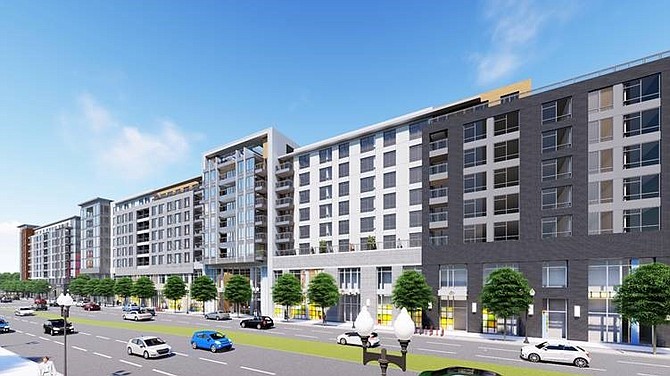 A rendering of the Harris-Teeter redevelopment.

A mixed-use redevelopment approved today by the County Board will replace the Harris Teeter and the American Service Center on N. Glebe Rd. with apartments, a new grocery store, other ground floor retail and a new public open space.

“In addition to hundreds of new homes, this project will keep and expand Harris Teeter in Ballston, while adding other retail and a more than half-acre open space,” Arlington County Board Chair Christian Dorsey said. “It will transform an auto-oriented commercial area into a more walkable mixed-use neighborhood with a better balance of uses. In addition to the public open space, community benefits will include a $4.1 million contribution to affordable housing; new public street connections; improvements to the traffic signals at Randolph Street and Glebe Road, and the replacement of a large water main under Glebe Road.”

The Board voted unanimously to approve amendments to the General Land Use Plan and existing site plans, a rezoning and other actions related to the redevelopment.

The approved plan will replace a single-story Harris Teeter, the American Service Center/Pre-Owned Mercedes Benz of Arlington at 600 N. Glebe Rd., and an adjacent single-family home at 525 N. Thomas Street, with two nine-story buildings and one seven-story building. The project includes 732 apartments, 77,575 square feet of retail space and 942 parking spaces. The developer will build extensions of North Tazewell Street and North Randolph Street into the block.

The developer has agreed to build and maintain an approximately 0.63-acre public open space on the site. The space’s design, guided by the Public Spaces Master Plan and the North Quincy Street Plan Addendum, will balance casual use spaces featuring biophilic design elements, urban and native plantings, including pollinator-friendly plants, a 2,000 square foot enclosed dog run, new trees; educational environmental nodes, accessible circulation, seating, bike racks, lighting and more. County Parks staff has completed the public engagement process on the design for the space that began in the summer of 2019.

The project will underground all overhead utilities and the utility service to the site and will contribute $345,000 to the County’s underground utility fund. The developer also will install an in-building wireless first responders network.