‘Their Patriotism Meant Everything to Me’: Chantilly Pyramid Schools Honor Local Veterans
Votes

‘Their Patriotism Meant Everything to Me’: Chantilly Pyramid Schools Honor Local Veterans 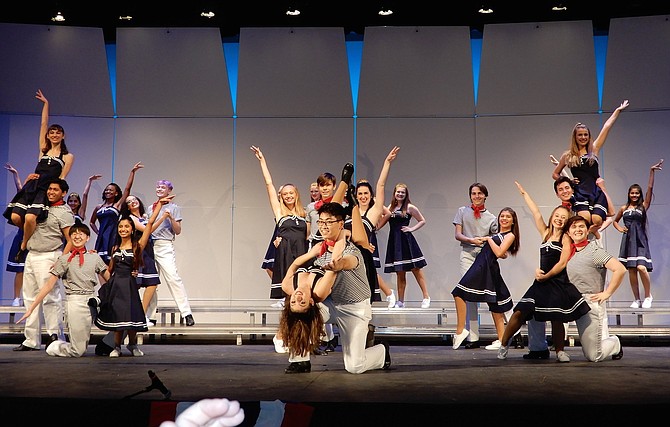 The Chantilly ShowStoppers performing, “It Don’t Mean a Thing.” Photo by Bonnie Hobbs.

These WWII veterans and their wives are ready to see the show. Frank Cohn (in suit) was the keynote speaker. 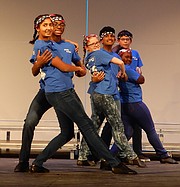 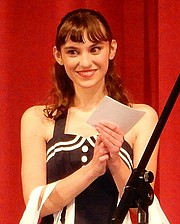 They heard the cheering even before they reached the entrance to Chantilly High, and once inside, attendees were greeted by students applauding them enthusiastically and holding signs of welcome and appreciation.

That was the scene, last Tuesday night, Nov. 12, when all nine schools in the Chantilly pyramid banded together for a special event honoring local veterans and active-duty military personnel. Organizing it was Chantilly student Madeleine LeBeau, president of iWitnessed iRemember.

She founded the nonprofit after being inspired by the annual “iWitness to History Day” held by history teacher Jamie Sawatzky when she was a student at Rocky Run Middle School. During that event, eyewitnesses to WWII and other wars share their firsthand experiences with the students.

LeBeau wants today’s teens to be able to meet WWII participants so they may learn from them and carry forward their ideals. So her organization hosts various events nationwide to promote the legacy of these American heroes. Last week’s celebration featured special musical performances, tributes and a dessert reception sponsored by Mission BBQ, Wegmans and The Cupcake Delivers.

In light of the upcoming 75th anniversary of the end of World War II, the evening focused on the service of World War II veterans and saluted men and women in all branches of the military. Besides Chantilly, schools participating were Rocky Run and Franklin middle schools, and Brookfield, Poplar Tree, Lees Corner, Greenbriar East and West, and Oak Hill elementaries.

ROCKY RUN’S SHOW CHOIR opened the program by singing, “Hallelujah, I Just Love Her So,” and members of Chantilly’s Air Force JROTC presented the colors. Then Chantilly’s Chamber Chorale sang the National Anthem.

“I’m proud that this event was initiated by a Chantilly High student, Madeleine LeBeau,” said Chantilly Principal Scott Poole. “She’s truly an extraordinary young lady, and we thank you [and everyone else involved] for your hard work and dedication to make this a reality.”

Poole then told the audience about his friend’s father – a fighter pilot who died in Vietnam when his friend was just 18 months old. “But his dad was Missing in Action until 2016, when his remains were found in a jungle in Laos,” said Poole. “He was later buried with full military honors in Arlington National Cemetery.”

Poole attended and called the funeral “one of the most moving experiences of my life and a testament to the life he led. And to the veterans here tonight, we thank you for giving your service and inspiring us to give back for the greater good. You make us proud.”

Poplar Tree’s choir performed two songs, including an Armed Forces medley featuring the songs of each branch of the service. Then LeBeau and co-emcee Matthew Mendoza had audience members stand to be applauded as their particular branch was named. Next, Chantilly’s Choir Ensemble sang the WWII song, “I’ll be Seeing You.”

GIVING THE KEYNOTE address was retired Army Col. Frank Cohn, 94. A Jewish youth growing up in Nazi Germany, he and his family came to the U.S. as refugees and he became an American citizen and joined the Army. He fought in the Battle of the Bulge and later served in Korea and other places before retiring in 1978.

Cohn told the crowd how much he appreciated the welcome he and his fellow veterans received that night at Chantilly, “just for being vets.” And as he said that, another veteran shouted out, “Amen.”

During WWII, since he spoke German, Cohn worked in Army Intelligence, and he talked about going to the Elbe River, which was the demarcation line. “I was just 19, and I made friends there with a Russian soldier who was glad the Germans were gone and the war was almost over,” said Cohn. “The Russians heartily welcomed the Americans.”

Sixty years later, in 2005, he was invited to Moscow to celebrate the anniversary of crossing the Elbe. And, said Cohn, “The Russians still treated us royally and as friends.”

Next, he and the other WWII veterans at Chantilly were honored by name – Sig Alman and Genevieve Desmarais, Navy; David Mbau, Air Force; and George Desmarais and Lee Smith, Army – and were given gift bags containing items from the school and local merchants. Then, after the various principals gave them hundreds of cards made by the students, thanking them for their service, these veterans received a standing ovation from the entire audience.

Onstage next was the Chantilly ShowStoppers choral group performing “It Don’t Mean a Thing,” followed by a musical rendition of “The Chicken” by the Chantilly Jazz Combo. Then teachers and volunteers who are also veterans were honored, and the Chantilly Chamber Orchestra performed the song, “Shenandoah,” plus “An Armed Forces Tribute.”

IN CLOSING, LeBeau thanked Poole, all the participating schools and the student committee members who made the event possible. To the veterans, she said, “Thank you for what you’ve done so we may learn and grow in peace.”

Afterward, two of the veterans explained what this program – and the recognition – meant to them. Richard Ford, of Chantilly’s Poplar Tree community, served 26 years in the Air Force before retiring in 1989 as a colonel. During Vietnam, he was a logistician in the Pacific, keeping the planes flying.

Calling the veterans event “fantastic,” he said, “Seeing the kids learning the military songs was really nice – and you can imagine all the work it took to put this on. It was also nice to have all the schools and different ages of students involved. It means a lot; and, of course, I was glad to see their Air Force JROTC, too.”

Another Air Force veteran, Bob O’Such, who also retired as a colonel in 1989, served 23 years overall. He was a pilot in Vietnam and was later the advance pilot for Air Force One during the Reagan, Ford and Carter presidencies.

Regarding the Chantilly event, he said, “This was a fabulous program. I was very impressed with these young people who showed superior patriotism and pride of country, all the way from the teachers to the students. It meant everything to me.”

O’Such said the Air Force taught him teamwork and loyalty. In Vietnam, he said, “It was incredible, the number of young people who lost their lives on their first mission and weren’t supported by many of the nonmilitary youths at home. So seeing the patriotism exhibited here by the students is very fulfilling.”