‘We Have Much to Learn from History’
Votes

‘We Have Much to Learn from History’ 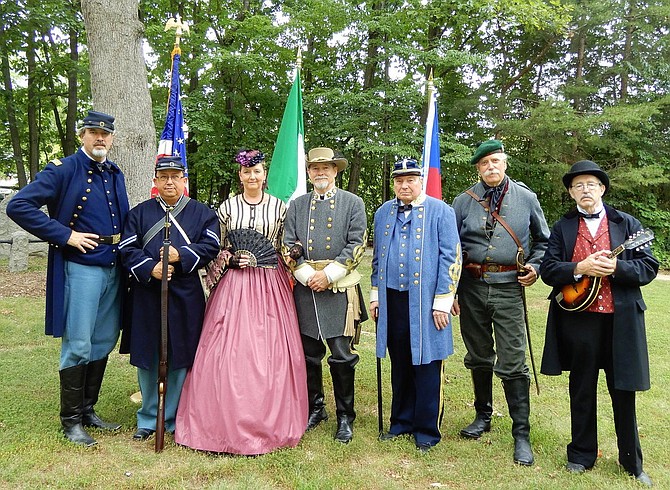 Laying a wreath at the generals’ markers are (from left) Dawn Roddy and Mary Concannon. 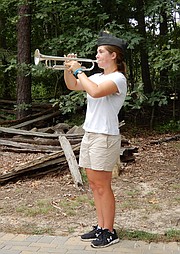 The Battle of Ox Hill/Chantilly, on Sept. 1, 1862, was the only major Civil War battle fought in Fairfax County. It happened during a torrential rainstorm and, by the end, it took the lives of two key Union generals and killed or wounded more than 1,500 soldiers.

Years later, the county preserved almost 5 acres of the 500-acre battlefield, creating Ox Hill Battlefield Park at the corner of West Ox Road and Monument Drive in Fair Lakes. And on Sept. 1, area residents and historians gathered there to commemorate the historic battle on its 157th anniversary.

“We ask Your blessing upon those who fell here,” said the Rev. Robert Ruskamp during his invocation. “And let us continue the fight for freedom for all Americans.”

The ceremony also included a description of the battle, the laying of a wreath at the Ox Hill monuments, presentation of the Colors, and Fairfax High band member Siobhan Murray playing “Taps” on the bugle. The event sponsors were the Ancient Order of Hibernians (Father William Corby Division), the Bull Run Civil War Round Table (BRCWRT) and the Fairfax Station Railroad Museum.

The battle took place on farmland and in woods on both sides of what’s now West Ox Road between Route 50 and Fair Lakes Parkway, and between Fair Oaks Mall and the Fairfax County Parkway. It’s sometimes called the Battle of Chantilly because the Northern army named battles after the nearest towns and the Southern army named them after prominent, geographic points.

THE FIGHTING was triggered by Confederate Gen. Robert E. Lee’s attempt to outflank the retreating Union army. “Both Confederate and Union forces were moving east to Jermantown, just west of the Fairfax Courthouse,” said Blake Myers, with the Bull Run Civil War Round Table. “The race was on to determine which force would first reach and gain control of the ridgeline at Ox Hill and the key crossroads at Jermantown.”

Dry ammunition became soaked, and the soldiers eventually had to use their bayonets and musket clubs. The conflict lasted some two hours, ending as a stalemate, but both Stevens and Kearny were killed.

Ox Hill marked the end of the Second Manassas Campaign. Afterward, the Union Army retreated to fortifications around Washington, while the Confederates headed north and crossed the Potomac River into Maryland.

“From the mid-1980s to the mid-1990s, a different war was waged to save and preserve this land,” said Myers. “This park formally opened, Sept. 1, 2008, and its preservation was the impetus for the preservation of other Civil War battlefields.”

Greg Wilson, with the Fairfax County History Commission, noted that his great-great-grandfather, Jonathan Roberts, was a scout for the Union Army and Fairfax County’s sheriff when the battle was fought. Roberts also met Kearny a year before his death here.

“We have much to learn from our common history – especially the local, regional and national conflicts that eventually erupted into the American Civil War,” said Wilson. “In his message to Congress, Dec. 1, 1862 – exactly three months after the battle here – President Lincoln reminded us, ‘We cannot escape history. The fiery trial through which we pass will light us, in honor or dishonor, down to the latest generation.’”

Wilson also said a Battle of Ox Hill/Chantilly app is being developed, with the Bull Run Civil War Round Table leading the fundraising. It will enable people to have a virtual, real-time experience of the battle to appreciate and understand its full impact. After he spoke, a wreath was placed at Stevens’s and Kearny’s monuments in memory of all the soldiers, Union and Confederate, who fell during this battle.

The keynote speaker was Bull Run Civil War Round Table member Ed Wenzel, who gave a detailed description of the battle. When it ended, he said, the Union soldiers withdrew to the Fairfax-Centreville road, leaving the battlefield to the Rebels.

The Union left behind 150-250 severely wounded men at a home which served as their field hospital. That site today is near the county’s Fire Training Academy on West Ox Road. For more information on the Battle of Ox Hill, see “Chronology of the Civil War in Fairfax County,” Part I, pages 320-394, published by the Bull Run Civil War Round Table.

Myers then read from the poem, “The Blue and the Gray,” by Francis Miles Finch. “First published in 1867, it was written to honor the widespread grief and mourning experienced throughout the North and South in the years immediately preceding and following the war’s end,” said Myers. “This poem was published widely and – by acknowledging the mutual suffering and sacrifices on both sides – it served as a stepping-stone to a reunified nation.”

He also noted that Ox Hill Battlefield Park is a continual work in progress. “It must be preserved, updated and continually maintained to ensure that it provides a welcoming setting in which to learn of, and better understand, the history associated with the battle,” explained Myers. “The park’s master plan recognizes that, while Generals Kearny and Stevens have long been memorialized, the common soldiers who fought and who fell during the battle have not been so recognized.

So, he said, the plan reserves historically oriented sites for two, yet-to-be-installed monuments commemorating those soldiers – a Union “Chantilly” monument and a Confederate “Ox Hill” monument. They’ve already been produced, have the same design and are inscribed with the respective military units that fought on this battlefield, plus a stanza from the poem, “The Blue and the Gray.”

Myers said these monuments – historically oriented along the interpretive trail. together with the Kearny and Stevens monuments – “will help make Ox Hill a fully interpreted battlefield park and a premier county destination for all who are interested in Civil War history and Fairfax County history.”

MARK RODDY, president of the Father William Corby Division of the Ancient Order of Hibernians, gave the closing remarks. He said it’s important to commemorate this battle because, among the things it represents is “the failure of our American ancestors to peacefully resolve their significant, cultural and political differences some 160 or so years ago.”

Therefore, said Roddy, “Given the increasingly polarized opinions and attitudes we see and hear today, we must continue to conduct – and reflect upon – commemorations like this.” Otherwise, he said, like philosopher George Santayana warned, “Those who cannot remember the past are condemned to repeat it.”